Few people have had as much influence on automotive performance as Carroll Shelby. He was a world class race driver until a heart problem forced him to pull into the pits for good. But he didn’t slow down. For 50 years, his name would be synonymous with speed and American horsepower. Now, Carroll passed away this past May. But, as our own Roger Mecca explains, even though he’s gone, his name and his cars will never be forgotten.

ROGER MECCA: Carroll Shelby’s life was an American Success story. A self-made man, he used grit, determination and a can’t-fail attitude to build an automotive empire. And while he’s no longer with us, his legacy lives on here at the Shelby American Collection.

ROGER MECCA: Sitting in the shadow of the Rockies in beautiful Boulder, Colorado, the museum is a shrine to the man who changed the way the world looked at sports cars. After acquiring a vast collection of Shelby cars, parts, and memorabilia, museum co-founders Bill Murray and Steve Volk began a friendship with Carroll Shelby that would last for decades. Knowing the two of them had such a large collection just sitting in a warehouse, Shelby offered a suggestion- a VERY persuasive one.

BILL MURRAY: He had called up and left a message on Steve Volk’s answering machine one day and basically he said ‘What are you gonna do with all those **** Cobras. You oughta start a museum! Steve played that for me and it was a real short message like that, and we just kinda looked at each other and said, ‘OK’. I guess we got our orders from the king, so we did it.

ROGER MECCA: So with the help of other Shelby fans and friends in Colorado, the museum opened its doors in 1996. Since then, gear heads and car novices alike have been learning about the Texan car builder’s life. For the museum’s founders, the collection serves a very important purpose: showing everyone who walks through the doors the important influence Shelby had on America.

STEVE VOLK: It’s important for us that everyone who comes through the museum realizes, this man he had a huge impact. He did a lot for America. He won the world manufacturers championship. He made America something in racing.

MARK OBERMANN: For somebody who started basically from nothing, and then to race and then to bring the race technology to everyday people like my wife and I can drive I think that really is the most special thing. 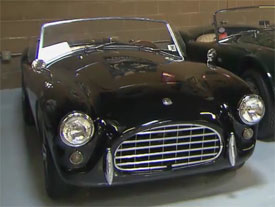 ROGER MECCA: The car Shelby was most proud of and most well known for was the Cobra. It was born out his desire to combine a nimble British chassis with an American V-8.  It also just so happened to come along at the perfect time to cement his name in Automotive history.

BILL MURRAY: He knew what people liked. They wanted a sports car, they wanted a car with a lot of horsepower and they wanted something that was easy to service.

CARROLL SHELBY: My name’s Carroll Shelby, and performance is my business.

STEVE VOLK: Here’s a guy who single-handedly ushered in the muscle car era. From the cobras came the Shelby mustangs then we saw all the other major manufactures getting into it with the Chevelles and the Chargers… He started it. He put America on the map.

ROGER MECCA: This is by far one of the most exciting and terrifying cars I have ever driven.

The noise, the weight of steering, the heaviness of the clutch, the acceleration… it was clearly built though by someone who loves to drive cars.

DR. ROBERT KERN: The Shelby machines are first and foremost performance vehicles. They never lost focus on that paradigm.

STEVE VOLK: The fact that a Shelby Mustang and a Shelby Cobra are featured in almost all the contemporary video games today is great. We have kids that come in that wanna buy models, wanna buy posters, wanna see the real cars.

BILL MURRAY: You’ve heard that term ‘I don’t know what it is, but he has it’? That’s what Carroll had. He just had this magnetic way about him.