In many ways, car museums are a contradiction. After all, displaying race cars in a perpetual freeze frame seems unnatural; some might even say, a tragedy. But while most museums adopt the "look, but don't drive" policy, our own Roger Mecca visited a unique collection in Pennsylvania that gives admirers the rare opportunity to see some of the most exciting automobiles of the last century, move the way they were meant to.

ROGER MECCA: For auto fans, being surrounded by race cars like this is about as good as it gets. And just envisioning what it must have been like to see these cars in motion, brings a smile to your face. But here at the Simeone Auto Museum outside of Philadelphia, you don't need to use your imagination.

FRED SIMEONE: These are dynamic things and part of the story is how they run, how they sound and without being  facetious, how they smell. And you can only get that if you run them.

ROGER MECCA: Yes, it's true! There is actually an auto museum that not only dares to take their artifacts outside, but starts them up, hits the gas and roars the engines! And the experience is a feast for the senses.

HARRY HURST: You get to hear these engines that you’ve only read about. The Ferrari v-12 or the Aston martin or the Porsche 917- you’ve only heard about what they’ve sounded like and now you can actually hear them.

ROGER MECCA: The fact of the matter is, Doctor Simeone doesn’t just drive one or two, but nearly  all of the 65 race and sports cars in his collection. Just so the public can appreciate them in a way that other museums can’t duplicate. And since they all share a common heritage, many of the vehicles have a history that intersects at some point in their glorious past.

ROGER MECCA: Once a month, Doctor Simeone and his team select a few of the cars from the collection with a common racing background. And on this weekend, it’s the Ferrari beaters, cars like this- it’s the 1967 Ford Mark 4, one of the cars that dethroned Ferrari as the king of LeMans in the 50’s 60’s and 70’s. And for the spectators on hand, it’s a thrill they’ll remember forever.

ROBERT PEREZ: It’s amazing that somebody takes care of the vehicles like this and gives the public a chance to come out here and witness this. You just don’t see this anywhere else.

COLIN WATSON: To see them running is a dream come true. You can hear the history driving around this track and they’re not opening them up 100% but to see them just running around and it’s- you can’t even explain it, it’s amazing. You have to see it for yourself.

KRISTINA CAVALLILO: It’s really incredible. It’s something I feel like anyone who’s remotely interested in cars would definitely want to come see.

ROGER MECCA: It’s clear the tradition of taking these cars out for the public to enjoy is appreciated. But not just by museum guests, but by those who see them every day. 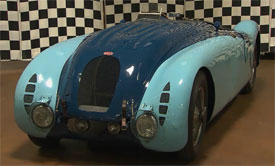 HARRY HURST: Sitting static, it’s almost like the cars are asleep and you take them out and run them and you can see that their whole personality changes.

ROGER MECCA: The philosophy here at the museum isn’t to race these cars but to drive them responsibly, never taking them above 30 or 35 miles an hour. But trust me- when you’re going 30 miles an hour in this Aston Martin DBR1, it still feels spectacular.

FRED SIMEONE: Use them- every car here is made to run, use it, but use it responsibly, don’t break it and make sure it has the same stuff it left the factory with. We don’t try to race or beat them up because I hope they’re here not just for decades but centuries. But we run them so everyone can see them and that’s turned out to be very popular.

ROGER MECCA: Any car fanatic can appreciate these amazing machines while they simply sit still under dimmed lighting. But to fully experience the thrill they're capable of delivering, the only option is to open the taps and let those horses run free. But be warned- once you see them move, it’s hard to imagine them any other way.