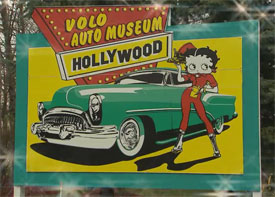 At MotorWeek, we love the world of movies and television! And when you combine them with cars, well it’s bound to be a great show. While we focus our cameras on celebrities of the wheeled variety, we can be as star struck as anybody. Cars in Hollywood have always been a natural fit. And our Roger Mecca has found a showcase that keeps those Tinsel Town icons forever in the spotlight.

ROGER MECCA: From Knight Rider to the Transformers, the cars of film and TV hold a special place in the hearts of both gear heads and movie-buffs alike. So it should be no surprise that a collection of this Hollywood horsepower would be a huge draw for fans from across the globe.

But you don’t need to go to Hollywood or even New York to find more than 80 of the most iconic cars from TV and film. Instead, head about 90 minutes west of Chicago to the Volo Auto Museum here in Volo, Illinois.

In fact, the museum has become so well known, that when studios wrap a production, Volo is the place they call, knowing full well this is the premier destination for retired car-stars. But this reputation wasn’t born overnight. In fact, they needed the help of a certain caped-crusader for people to take start taking notice. 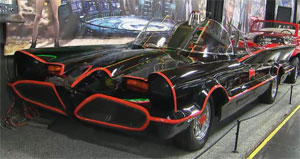 BRIAN GRAMS: We were approached by George Barris. George Barris is the original builder of the original TV series Batmobile. And that was our first Hollywood car. It proved to be a favorite of the public and was drawing a lot of attention and bringing people into the museum, so then we started expanding from there.

ROGER MECCA: And expand they did! Soon, the General Lee, Michael Knight’s KITT, The Muster-mobile and many more became part of the collection and finding the cars became easier and easier.

To keep visitors excited, the museum’s owners constantly turn over the pieces, making sure visitors return to see what’s new. But it’s the first time visitors that are left with the biggest impression.

ETHAN SCHAFFNER: We had just had a sleepover, so we were just like ‘Yeah, I guess we could do that’ and then we got here and it’s like ‘WHOA, THAT’S SO AMAZING!

JOSH PUCE: It was a lot of old stuff and things you don’t usually see every day. It was really cool. 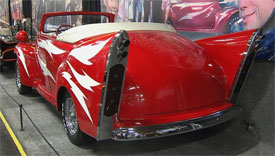 ROGER MECA: Many of the movie cars have a very unique story behind them. Case in point-Grease Lightening! This is the original car from the movie. But when the museum owners actually tracked it down, it wasn’t in what you would call… showroom condition.

BRIAN GRAMS: It was at a body shop and it turns out, it WAS the actual car. The guy was hired to restore it by a collector from New York and the collector passed away. So, he wasn’t getting paid to restore it anymore, he shoved it outside and there it sat. Three or four years it just sat outside.

ROGER MECCA: Another tinsel-town icon left for dead in the desert is the Ferrari Daytona from Miami Vice.

BRIAN GRAMS: The leather interior shrank, it looked like a shrunken head, the seats were so small just from sitting out in the elements getting rained on and the sun beating it.

ROGER MECCA: In their own way, these high-revving pieces of memorabilia are just as famous as the legged stars that drove them. And with fame, come fans from far and wide, each with a personal favorite. 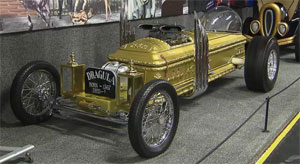 ARNIE HERTZEL: Definitely the Bat Mobile, Grease Lightning is pretty phenomenal, the Munster is a really great set-up too. Dukes of Hazzard, KITT - how can you go wrong with those. Those are great!

JOE ROBERTSON: The Dukes of Hazzard. It’s just my era when I grew up.

EUGENY KOSINO: My favorite car from the movie is Back to the Future. 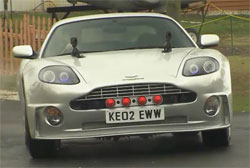 ROGER MECCA: This is one of the Aston Martins that was used In the James Bond film Die Another Day and as you can see, it drives perfectly well. Which shows you that most of the cars here at the Volo Auto Museum go just as well as they show.

BRIAN GRAMS: The Eleanor Mustang - that’s a big block four speed. That thing really rocks. The Black Beauty we have. I actually drove that to a few car shows over the summer - took it out and drove it.

ROGER MECCA: And as more and more cars are driven from the bright lights of Hollywood to the quiet town of Volo, the fans are sure to follow. But one thing’s for certain, these movie masterpieces certainly age better than the stars who sat behind the wheel!