Most people think that for true all weather capability, you need an SUV or a crossover. But as Roger Mecca discovered, the iciest roads can also be expertly handled by a traditional 4-door sedan. The key is making sure it’s equipped to fit the slick mission from the start.

ROGER MECCA: Here in the mountain town of Jackson Hole, Wyoming the scenery is spectacular, the skiing is incredible and the winters? Well, winters are pretty harsh. In fact, a few years ago this town got 600 inches of snow. So your first instinct if you’re going to be driving around in a place like is, ‘I gotta get an SUV, But that instinct would be wrong.

ROGER MECCA: The fact is, more and more automakers, like Mercedes Benz, are adding advanced all-wheel drive systems to their popular sedans and coupes, allowing drivers to venture out into the snow with as much confidence as any SUV or crossover.  While those bigger vehicles are excellent for whatever winter dishes out, dealing with cramped parking, twisty roads, and rising fuel prices can make those vehicles seem unappealing. But with the traction provided by AWD systems such as Mercedes’ latest 4Matic, drivers can now have true all-weather capability and real world convenience.

CHRISTIAN BOKICH: All wheel drive vehicles are typically associated with trucks, S-U-V’s that you have to have this big monster of a vehicle in your driveway just to make sure you can have all wheel drive. Today’s all-wheel drive systems are so light and so nimble that they fit in all types of passenger vehicles.

ROGER MECCA: By using electronic traction control to distribute power, cars equipped with full-time all-wheel drive are able to grip the road better than a traditional rear or front wheel drive car, no matter the weather.  But it’s when the snow starts flying that you realize how capable a car equipped with all wheel drive can really be. 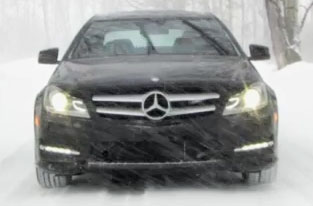 DAVE LARSEN: Four wheel drive really originated with pick up trucks, later on into SUV’s and really I think that’s in the public’s mind that you need to drive a vehicle like that in order to have ability to maneuver through snow, which is absolutely not the case.  Our vehicles equipped with the 4-matic system can, as you’ve seen today, can transverse snow courses without any problem. The vehicle delivers the traction similar to a SUV, it’s the exact same thing- it’s putting the power to all four wheels.

ROGER MECCA: Mercedes isn’t alone in adapting all wheel drive technology to more and more sedans and wagons.  Other luxury brands as well as a number of mass market brands have made all-wheel drive an option on popular cars. And in the world of exotic cars, marquees from Ferrari to Bentley have introduced four-corner traction to their lineup.  This widespread use of all-wheel drive indicates that as technology has improved and weight has gone down, all wheel drive has become as mainstream as power windows.

CHRISTIAN BOKICH: There are no drawbacks to having an all wheel drive system in a vehicle, aside from a few slight fuel economy dips and in some cases, some Mercedes Benz passenger vehicles have zero differences in fuel economy, which is pretty remarkable for a lightweight system.

ROGER MECCA: Back in the 1960’s, Lamborghini changed what everybody though they knew about where an engine has to sit in a car. And years later, Honda and Toyota shattered what we thought we could get for miles per gallon.  Today, automakers like Mercedes and their 4-matic system, are letting everyone know that to have fun in a place like Jackson Hole, an SUV is not required.