Most people think about cars when considering steps each of us can take to reduce fuel consumption and tailpipe emissions. But when you add contributions from cleaner truck and bus fleets those baby steps turn into giant steps. One alternative, electric powered trucks, makes great sense for many applications, and we’ve found two forward-thinking companies taking different paths to that same clean goal.

JOHN DAVIS: Refuse trucks, transit buses, local delivery fleets, and passenger shuttles all operate in rigorous stop and go duty cycles during their daily routines, and can spend hours a day idling.  With a typical gas or diesel powertrain, these trucks burn millions of gallons of fuel each year and emit tons of greenhouse gas emissions in to the atmosphere.

But that stop and go routine and local footprint makes these kinds of trucks prime candidates for running on electric power instead. 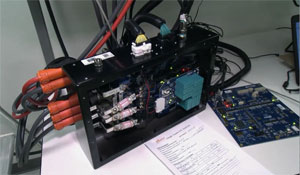 JIM CASTELAZ: “Unlike passenger cars, where everything in the car is kind of designed by an OEM, soup to nuts, in the truck space, a lot of trucks use the same engines. So, you have a company like Cummins that supplies engines to a lot of different truck builders, and we thought we could do that for electric vehicles.”

JOHN DAVIS: The advantage of electric drive is in having fewer moving parts to maintain, but the complexity lies in the software. Using Motiv’s own electronic control systems, the company can monitor a truck’s performance through telematics, update software, and configure parameters like top speed, all remotely from anywhere in the country.

Taking truck electrification to the extreme is the business plan for Wrightspeed, the brainchild of tesla co-founder Ian Wright. 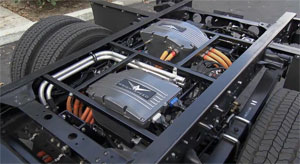 Wright sees an opportunity to retrofit thousands of existing trucks with his unique plug-in electric power system, giving new life to older chassis, at a fraction of the cost of a whole new rig. Like Motiv, they see refuse trucks as an especially good fit for battery power.

JOHN DAVIS: Wrightspeed’s full plug-in system was designed in-house and uses an electric motor and gearbox at each drive wheel. Much like a Chevrolet Volt or BMW i3, it adds a range extender to recharge the battery packs while driving. But in this case, the truck’s original engine is replaced by a compact 80kw gas turbine generator.

IAN WRIGHT: There’s  a very similar technology in cars, turbochargers, and they make 10 million a year for 150 bucks each, and what if you use that kind of technology to make a turbine engine, a small one, specifically for a range extender for use in vehicles, could you take advantage of that and drive the cost down? Yes, you can…once you do that, of course, you can then take advantage of the much lower emissions profile from a well-designed turbine, it can be ten times better than a piston engine. 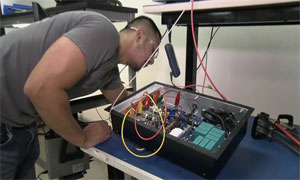 Which means you can pass the toughest emission standards in the world without having to use a catalytic converter or particulate filter, or urea injection, even if you’re burning diesel.”

JOHN DAVIS: Taking advantage of inexpensive power from the electric grid to charge the vehicles battery packs, recovering lost braking energy over thousands of hard stops each day, and tuning the gas turbine to run at peak efficiency regardless of vehicle speed, are all paths to saving fuel with Wrightspeed’s electric drive system. The reduction in emissions and noise pollution are substantial as well.

By leveraging their unique talents in mechanical engineering and control systems, coupled with their passion for effecting environmental change, both of these visionary companies see a clear path to making America’s heavy haulers, new and old, more efficient and emissions-free with electric power. And that spells good news for delivering a clean driving future.