Heavy duty trucks: they’re the backbone of our nation’s commerce system. Big rigs transport around 70% of the goods and materials around the country. The bad news is, they consume about 20% of our transportation fuel even though they make up less than 5% of the traffic on U.S. highways. The need to improve truck efficiency is crucial, and the U.S. Department of Energy has come up with a super answer! 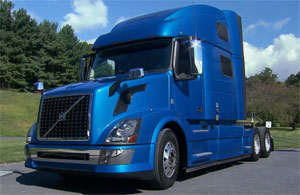 It’s known as the SuperTruck program, and its goal is for truck makers to show a 50% improvement in freight efficiency, or ton-miles per gallon, for a class 8 tractor-trailer, and also to achieve 50% thermal efficiency in the engine --- basically, to haul more stuff with less fuel -- by the year 2015.

The program started in 2010 with 4 DOE grants, totaling 138 million dollars, to Daimler, Volvo, Navistar, engine maker Cummins, and their partner Peterbilt. Each SuperTruck “team” has matched these funds with an equal investment of their own and the result has been a super-charged R&D effort that is already paying dividends.

Not surprisingly, all of the manufacturers are taking a holistic approach, seeking incremental improvements in many areas, rather than trying to find one “magic bullet”.

PASCAL AMAR: We have the ability to explore more areas than we would typically. It gives us the ability to do more testing, more analysis, more calculations. I think the key with this program is, it forces us to look at the complete picture, the complete vehicle. Not just the powertrain and not just the cab exterior. So it really allows us to identify synergies that we might have missed otherwise.

JOHN DAVIS: The most obvious improvements on each truck are the aerodynamic aids. Extensive wind tunnel testing has found ways to make the big box less boxy, minimize body gaps, and improve airflow around the rig. 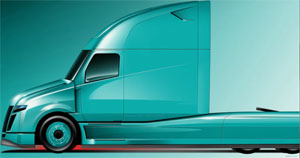 All four groups have made significant progress. Some have met or exceeded the project goals already and some of the green tech developed in the SuperTruck program is already making its way into production trucks.

Some of the design sketches look downright sci-fi, but may become reality sooner than you think!

PASCAL AMAR: One of the first tangible deliveries of the program is that we’re able to leverage some knowledge we gained from early aerodynamic testing of the SuperTruck test mule we used. We’re applying some of the findings to chassis fairings, front bumper, and roof deflector. These improvements will be on our model year 2016 VN highway trucks. 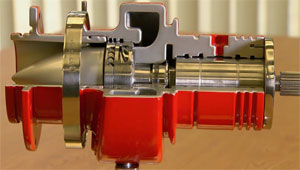 To date, only the Peterbilt/Cummins team has a fully functioning SuperTruck demonstration vehicle, which has achieved 10.7 miles per gallon, or almost double what the average rig gets today.

SuperTruck technologies can save nearly 6 billion barrels of oil by 2050. To the average truck owner, that could add up to $35 thousand a year in fuel savings! And as with any new technology, cost to the end-user is an issue, and no group of vehicle owners is more aware of the bottom line than the thousands of big rig owner-operators who call our highways home.

WAYNE ECKERLE: Well, what we have to do is, we have to demonstrate technology, and deliver technology that hits our customers payback period of 18 months. So we look at the drive cycle, how much fuel they burn, so as we put on technology to reduce fuel consumption, it has to reduce fuel enough so that you can pay off the technology in 18 months, and for the rest of the time that they have the truck they’re actually saving money.