MotorWeek was recently in Las Vegas for this year’s consumer electronics show. As usual, it was the first outing for cutting edge TVs, cell phones, tablets, and everything high tech. But, in recent years automakers have also been swarming the event to show off autonomous technology, EV powertrains, and their most advanced models. As our Stephanie Hart shows us, CES 2019 was outrageous, overwhelming, and eye popping fun!

STEPHANIE HART: CES it's the go to place to reveal the latest innovations to the global market. Anyone who is anyone is here. From tech powerhouses to innovative start-ups to automakers. So of course we had to be there… Along with 188-thousand of our closest friends. 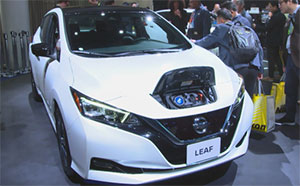 Car makers continue to expand their presence at CES, with more debuts of both their latest cars and tech.

Nissan had a powerful presence at CES. Debuting the much-anticipated Leaf e + to the world. This time around, it has more range and power. It claims a 226 mile range, up 40-percent from 150. Horsepower gets a boost too… from 147 to now 214… that’s 67 more!

And in a Mercedes-Benz first, the German automaker chose CES for a global debut of its 2020 CLA-Coupe. It’s striking, has a bit more power and is full of tech.

OLA KALLENIUS: The new CLA takes MBUX our connected car operative system to the next level with new features like the energizing coach, like an intuitive gesture control.

STEPHANIE HART: Mercedes also used CES for its U.S. premiere of its first all electric SUV -the EQC.

It has range of about 280 miles between charges. It is the first model under the German automaker’s new product and technology brand EQ. Despite big changes in how cars will be powered, or if we’ll even drive them ourselves, clearly automakers think their future is bright.  So bright, I gotta wear shades or in this case virtual reality goggles. 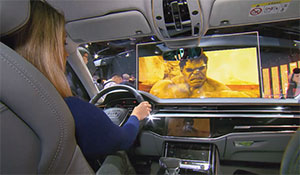 STEPHANIE HART: This is Nissan's invisible to visible technology demo. It merges the real world with the data world. This feels so real you have no idea. Essentially giving drivers, like me,  loads of information. So you’re driving down the road and let’s say it’s rainy outside this is actually going to give you a clear picture of what is in front of you as opposed to you having to see through the rain and have those challenges. Yeah this is awesome… it is awesome… yeah it’s cool. But I felt a little whoosy after that trip through the virtual world. To help bring me back to earth – coffee. My caffeine buzz courtesy of this Nissan leaf… powering pretty much everything you see here. My portrait was even put on my drink. Cool yet startling, but isn’t that what CES is all about! Movie buffs and tech geeks alike got their fix over here at this Audi demo. I took the driver’s seat to see for myself what all the hype was about.

As I soon found out, the car bounces up and down on its suspension to the best parts of the movie. Throw in special effects - and you have an experience like no other. The only thing missing? The popcorn.

STEFAN GRILLNEDER: This is what we have brought to CES and we are showing what is possible. 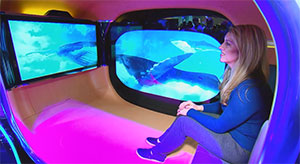 STEPHANIE HART: Perhaps your only limitation your mind. This KIA demo analyses bio-signals like facial expressions. The car then tries to change your mood. In my case, the car sensed I was over excited so surrounded me with an ocean scene to relax me. From traditional car reveals... To flying cars... Yes you heard it right. Bell Helicopter unveiled its prototype at CES. It doesn't fly -well not yet -that is. Skeptical? So are we.

CES 2019 was everything we expected and more - daring us to think outside the box - get out of our comfort zone - and blur the lines between fantasy and reality.