60 Years of James Bond at the Petersen Automotive Museum

The original vehicles driven by the world’s most famous secret agent, 007, are now on display at the world-renowned Petersen Automotive Museum in LA. It’s the largest official exhibit in the U.S. celebrating 60-years of Bond-- James Bond cars. Our FYI reporter Stephanie Hart shows us around. 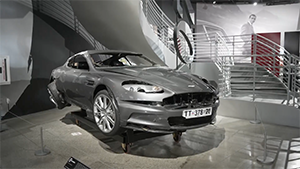 STEPHANIE HART: A lot of you probably recognize this 1964 Aston Martin DB5. It’s been in the most James Bond films-- 5 of them-- and it’s in the latest Bond movie, No Time to Die. It’s in that opening scene with Daniel Craig.

This is the first time the DB5 and 29 other modes of transportation, featured in the 007 films, have been together in one exhibit in the United States. It’s a full chronology of bond!

Does this one look familiar? It’s what’s left of the Aston Martin DBS from Casino Royale.

MICHAEL BODELL: In the scene where he’s going down the road at night and Vesper is on the road and he quickly swerves out of the way, the car rolls 7 times. It was never intended to roll that many times and they unintentionally broke a Guinness Book of World Record in that stunt

STEPHANIE HART: Honestly, for rolling that many times the car is in great condition! 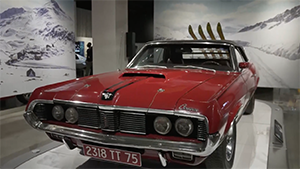 The film On Her Majesty's Secret Service is showing right here. The 1969 Mercury Cougar used in that film is right here, in the exhibit. In the film, James Bond’s wife drove this vehicle most of the time. She showed off her driving skills, ending up in the middle of a stock car race on a frozen track.

MICHAEL BODELL: I think it was a completely new atmosphere for Bond and so it kind of just helped develop that that car was so much more capable. The XR7 cougar was just a cool car: 7-liter engine, extremely powerful american car featured in, you know, British film.

STEPHANIE HART: Some say a car is nothing without the story behind it, and the 007 films certainly help develop that story.

MICHAEL BODELL: This is the 1977 Lotus Esprit Series One from The Spy Who Loved Me. This was driven by Roger Moore, and it’s a Bond vehicle that was land and sea, so there’s a really famous scene where this car is being chased in Sardinia and it goes from basically a mountain road into the ocean and turns into a submarine.

STEPHANIE HART: This Aston Martin Vanquish was used in Die Another Day. As you may remember, it has tiny cameras all over it that makes it nearly invisible. It also has weapons and tracking devices that are very crucial during that very scary chase scene across ice. 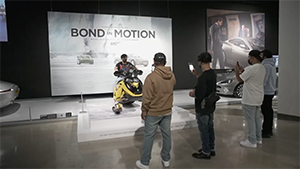 MICHAEL BODELL:  James Bond’s characters are really developed by the technology and the gadgets that he uses, and the cars are a large part of that. They’re not just a car, they’re a tool of his to, you know, fight the bad guys.

STEPHANIE HART: A cool concept that has connected and captivated every generation for sixty years.

Anything that really surprised you about this exhibit?

SCOTT BLACK: I expected to see the vehicles. I didn’t expect to see the curation. I love the videos. I love the photography. There’s some phenomenal shots here. Seeing a lot of the aircraft and seeing some of the submarines and stuff, you know, it really brought home a little bit of Hollywood.

STEPHANIE HART: Surrounded by all these incredible 007 cars for most of the day, I had the urge to get in the driver's seat and take them out for a spin. Since that's not in the cards for me, binge watching all the Bond movies may just satisfy my need for speed-- for now.