JOHN DAVIS: Military hardware never fails to impress with its advanced technology for the times. That’s certainly true today, and it has been the case for decades, even centuries. So, our fyi reporter yolanda vazquez recently did a tour with some past military mobile icons that fit perfectly in our motorweek wheel-house.

YOLANDA VAZQUEZ: Here’s something you don’t see every day.  A 48-ton, m47 patton tank doing a few spins around a parking lot. 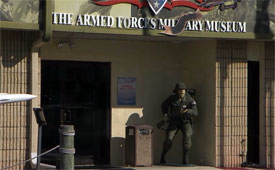 Or me going for a very, nervous ride in a wwii m8 greyhound reconnaissance vehicle.

It’s just some of the sights and sounds you’ll see at the armed forces history museum in largo, florida.

FRANK CORREA: “This museum largest collection in se us. it’s truly a jewel. we have well over 130,000 item.”

Frank Correa is a long-time historian with the museum who spent 4 years with an anti-terrorism team in the Marine Corps.

FRANK CORREA: This place I tell people when i go on speaking engagements. this museum will change your life-it really will.

And if you’re a huge military buff-- there’s enough tanks, tractors and jeeps to tickle your fancy.

Notable vehicles include this m16 half track that was built by the white motor company, this wwii m3 scout vehicle that was used for various purposes, this 1944 8-cylinder, two machine gun sherman tank and this amphibious vehicle from wwii and the korean war. 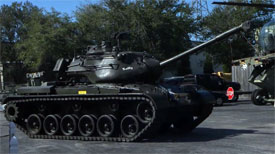 And then there’s a hodgepodge of other items like this one-of-a-kind jeep prototype from the 60’s that never caught on and this 1942 harley davidson wla.

YOLANDA VAZQUEZ: “Remember the field hospital trucks from tv series mash. this is a real one. 1951 dodge ambulance. top speed of 55mph, driving range over 200 miles and this is where they put wounded soldiers for transport.”

The korean war sticks out strongly in Bill Allen’s mind. he was a pow for 31 months in a north korean prison camp.

BILL ALLEN: “We buried over 6,800 bodies within 60 days. starvation and no medical.” 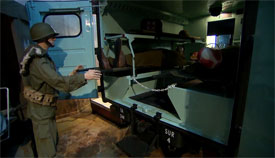 The 82-year old gives weekly tours and has set up a little corner of history in the museum.

BILL ALLEN: “I just brought a bunch of my stuff. they got the stuff and they got me.”

For peter clark, this museum brings back memories. as a second lieutenant, he was responsible for the removal of army gamma goats from his unit.

PETER CLARK:  “I’m feeling old right now…something I rode in is in a museum…yeah scary thought”

But the highlight of the museum-without a doubt-is the chance to ride in this 1943-completely redone- m8 greyhound.

Correa put it through its paces on 6 acres of land-trying to trip me up.

YOLANDA VAZQUEZ: “Oh boy don’t let go whatever you do”

But i held on tight and was rewarded with an m8 crew member certificate in the end.

YOLANDA VAZQUEZ: “Look at that. it’s official, I survived” 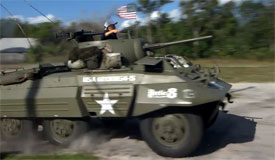 BILL ALLEN: I’m the luckiest guy in the world. i get to play with all this stuff, tell people about great history of our nation...sacrifices by those who have worn the uniform. I’m truly blessed what can i say.”