You see them every day, and don’t give them much thought! But license plates are just as much a part of automotive history as the vehicles they’re on. After all, they have evolved together. And, each year, collectors gather to celebrate the lowly license plate. So we asked our FYI reporter Yolanda Vazquez to look into why so many are so fascinated by something so simple. 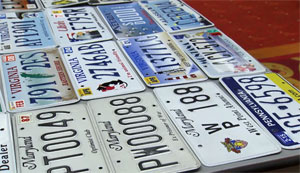 YOLANDA VAZQUEZ: The wide variety of license plates in this parking lot outside---should give you a clue as to what’s happening on the inside of this convention center.

MAN: “Tom, what are you looking for?”

YOLANDA: From North Korea, to New Mexico to the nation’s capital…

YOLANDA: …license plates are the name of the game at the annual ALPCA convention in Rogers, Arkansas. 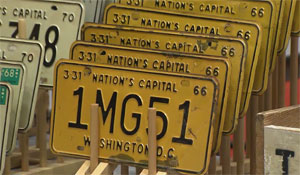 MAN: “…bout anything you’d want to find from anywhere in the world…I’d say so…”

YOLANDA: For the past 61 years, the automobile license plate collectors association has given these mostly metal tags a renewed purpose for their nearly 12,000 members.

NED FLYNN: “We are all assigned numbers, appropriate for a license plate collectors.”

YOLANDA: Ned Flynn began his alpca career in the mid-70’s after seeing an ad in a magazine.

NED: “I said there are others who do this sort of thing? well sign me up…”

YOLANDA: Flynn’s specialty are 1915 porcelain plates from Pennsylvania. His display highlights small design differences—there’s a period after “penna” on this plate but it’s absent on another.

TED: “I think it’s fascinating to get into that minutiae.” 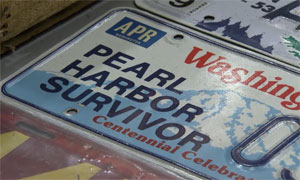 YOLANDA: Many of the members are looking for something specific. A sport, a superhero, maybe even a Pearl Harbor plate…and they’ll even travel from down under...

YOLANDA: …to trade their wares with others.

MICHAEL MORGAN: “…whether it’s their birth year, the state they were born in…or their first boy or girlfriend came from that state, or whatever, there’s a lot of connection to it besides just a piece of stamped metal.”

YOLANDA: “From the very beginning license plates have had multiple uses-they’ve promoted products like potatoes in Idaho to experiences like Vacationland in Maine. But what we’ve come to know them best for are their savvy slogans. For example, Florida is known as Sunshine State…but New Mexico had it first, back in 1932. 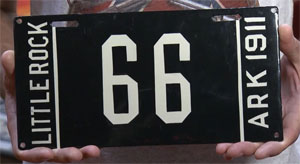 JOHNNY McKINLEY: “this has been an awesome experience for me…kind of a lifelong dream…I’ve wanted to come to a license plate show like this for a long time.”

YOLANDA: Unlike McKinley, Tom Lindenberg is a regular with an extensive Canadian plate collection. He says no one is getting rich off this hobby. They mostly do it for the camaraderie.

TOM LINDENBERG: “…hanging out with the guys, what’s new, what’s going on… lost a few members been with us for years and years…” 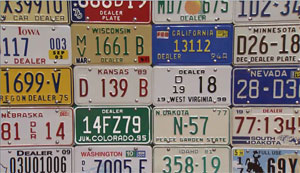 JEFF: “I think half the garages in the U.S. have a bunch of old license plates on the wall...because guys do that…”

YOLANDA: And while we don’t think of it—they are tied to our country’s automotive history-changing in size and shape over the years.

JEFF: “…But then after 1956, they all got together and said, ‘this is crazy for the car bumpers we need them standardized’, and all that stuff…”

YOLANDA: So no matter the state or statement-these plates have become a part of pop culture…leaving behind a legacy…that might be worth something someday.

NORMAN RATCLIFFE: “I tell my wife...you seem to collect those shoes not sure how much worth in the end. You’ll make money off this if I kick bucket any sooner than I need to…”