With all the stress in our lives today, wouldn’t it be great to get away from it all for a few hours and take in a movie? Well our Stephanie Hart has found a way to take in Hollywood’s best, and still maintain a social distance.

Stephanie Hart: Going to the drive-in movie theater is the increasingly popular thing to do these days – a result of COVID-19. 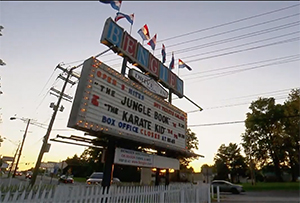 Like here at Bengies Drive-in movie theater outside of Baltimore. Bengies is the only drive-in left in Maryland, but still boasts the biggest outdoor movie screen in the country at 52 feet high by 120 feet wide. D. Edward Vogel is the proud owner.

D. Edward Vogel: Anybody in the movie business is grounded in it. It is something immediate that you can not shake.

Stephanie Hart:  Drive-ins are in his blood. His step-father built more than 300 drive-ins and had a hand in about a thousand.

D. Edward Vogel: Drive-in movie theaters built Hollywood. People don’t understand that there were far more many drive-ins than there ever were indoor theaters up until the invent of the multiplexing and all that.

Stephanie Hart: Bengie’s opened in 1956. Two years later, there were 4-thousand drive-in movie screens across the country. Now, more than a half century later there are only about 300 theaters left in the United States.

Coming to the drive-in is like taking a step back in time and in this COVID-19 era it's convenient that social distancing is built in.

Because of that, Bengies is getting more first time visitors than ever before. Families like the Pridgens.

Morgan Pridgen: For this being our first time this is definitely a memory for us and we are going to cherish it and I'm sure we are going to be back a lot more times. You know because I don’t think the Corona is letting up anytime soon. 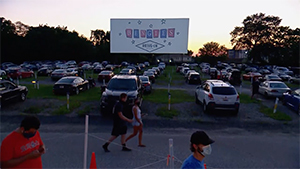 Stephanie Hart: COVID -19 has created a new breed of drive-ins too. Dubbed pop up drive ins. We visited this one in Fallston, Maryland.

Traditional movie theaters, like horizon cinemas, are converting their parking lots into makeshift drive ins –giving patrons the entertainment they crave with little or no human contact.

Back at Bengie’s, you can feel the nostalgia in the air as the sun sets and the double feature gets ready to start.

A lot has changed since the height of the drive in in the 1950’s, but a lot has also stayed the same. 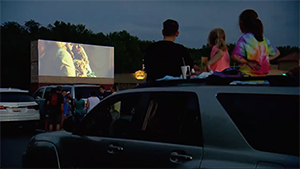 Joe Hershfeldt: It’s a fantastic place to come to sit outside in the truck on a summer night. I mean we get here as soon as the box office opens and even before the movie we are just enjoying the weather, enjoying the food, everything about it.

Hannah Hershfeldt: We have our exact menu every time- the same time that we eat.

Stephanie Hart: What is it?

Hannah Hershfeldt: We plan it out. It’s the burger, the fries and birch beers is the most important.

Stephanie Hart: Joe and his daughter Hannah have been Bengies regulars for thirteen years.

And perhaps the drive in rubbed off on Hannah in more ways than one.

Hannah Hershfeldt: I want to go into the film industry and basically I just grew up on movies - so coming here is a big, I don’t know, cultural thing for me.

Stephanie Hart: With so many indoor venues closed due to COVID 19, Bengies and other drive-ins are also seeing new business opportunities.

Ken Adam: We get 30 to 40 requests a week from corporations, non-profits concerts, comedians everyone seems to want to get in here. It’s a great source of revenue. 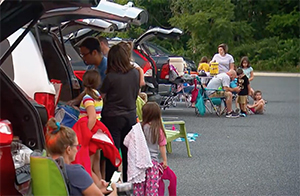 Ken Adam: It feels like family here. I’ve seen it grow and evolve over time and I feel like, you know, I have been a part of that and I’ve helped that.

Stephanie Hart: With the increased demand because of COVID-19, Bengie’s, and other drive-ins sell out pretty quickly these days.

Mauri Corrigan: You have your space to watch your movie then you can also get out of your car in your car you can be at the snack bar so even though it’s just the drive in movie there's a lot to do.

Stephanie Hart: COVID 19 won’t be here forever, but watching a movie under the stars from the comfort of your car is here to stay.