There is a lot of buzz about car sharing, especially in bigger cities where owning your own car can be crazy expensive. But leave it to the Europeans to blend that trend with the desire to drive all-electric. And, now, that mix has arrived here. To check it out, our FYI reporter Lauren Morrison went to a mid-west city that’s best known for the call “ladies and gentlemen, start your engines!” 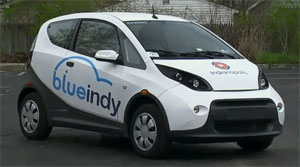 LAUREN MORRISON: There’s a new car making the rounds in Indianapolis these days…and its name is blueindy.

LM: The idea is simple…need a car? Check one out from any one of the many stations scattered across the city.

LANCE BOEHMER: “Essentially helping you get from point A to point B in a vehicle.”

LM: The charged up concept comes from the city of light.

LM: But when I heard the all- electric fleet was up and driving in America, I knew I had to try it myself. 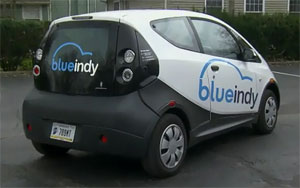 First off, the actual car…which was created especially for the Bollore Company.

ED SEARCY: “The designer is Pininfarina, that’s the same designer for Ferrari.”

LM: “The blue cars are powered by this, a 600 pound lithium metal polymer battery, which is unique to BlueIndy’s parent company.”

ED SEARCY: “The battery is a proprietary to BlueIndy. The technology has been around for roughly 20 years.”

LM: “To check out one of these cars, you do have to have a membership, which you can get one of two ways. The first, you can register online at home and receive your BlueIndy membership card in the mail. The second way is just by walking up to one of these kiosk scattered throughout the city.”

Once you’ve got your membership card, all that’s left is reserving your bluecar.

LANCE BOEHMER: “You can actually reserve a vehicle in our app, or at a reservation kiosk, which we have at every single station.” 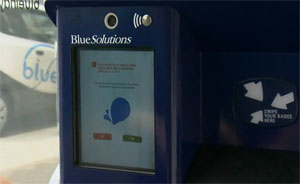 LM: Fees start at $8 for a spur of the moment 20 minute drive, with discounted weekly, monthly, and yearly plans. To unlock the car, just swipe your membership card, then unhook the car from the charger, and you’re good to go.

“Alright, let’s see how she drives.”

The blue cars have about a 120 mile range on a full charge. We drove ours throughout the city with no problems.

“The Blue car is easy to drive through slow city traffic, but it’s also got the speed to pick up and head to the highway.”

LM: Now, to the inside of this 4 seater… 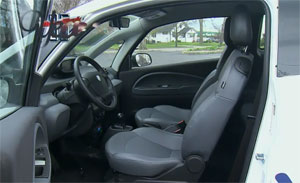 LM: “In terms of the back seat, it’s really not that bad. For a small car, no complaints. It kinda reminds me of a Honda Civic.”

The all-electric aspect of blueindy has the city going green.

LANCE BOEHMER: “One thing we do is eliminate vehicles from the roads. Tailpipe emissions are the number one pollutant in the city of Indianapolis…So what we’re going is, we’re cleaning the air by eliminating all those tailpipe emissions and by pulling personal vehicles off the street and providing cleaner options.”

LM: Once you’re done with your drive, you just pull into a spot at any blueindy station.

LANCE BOEHMER: “You can drive from any spot and you can take it to another BlueIndy charging station.”

LM: Park the car, plug it back in, lock the door….and you’re done!

With plans in the works to have 500 bluecars in their fleet by the end of 2016, pretty soon, Indy cars won’t be the only vehicle Indianapolis is known for!