Home » Features » FYI » Checking Out Cars and Caverns at Luray

Checking Out Cars and Caverns at Luray

The spectacular Luray Caverns in Virginia is a national landmark. Plus, it’s surrounded by terrific driving roads, and that's reason enough for us to visit the area. But also, just beyond the caves is a large collection of vintage vehicles that includes the oldest car in operating condition on display in America. So, let’s follow Stephanie Hart into the caves and check it all out. 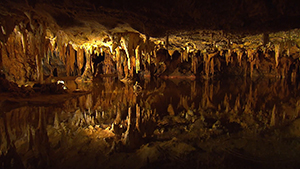 STEPHANIE HART: As you can see the Luray Caverns are other-wordly. It’s extremely peaceful down here, it’s beautiful and it’s 54 degrees with 87% percent humidity-- and there’s a unique cave smell here which adds to its charm.

BILL HUFFMAN: Luray caverns is the largest cave system on the east coast and we are constantly ranked 12th in the world.

STEPHANIE HART: Explain how the caverns have evolved over time.

BILL HUFFMAN: The caverns is constantly changing, but it does grow slowly. So about every 120 years a cubic inch will grow of rock so it takes a long time

STEPHANIE HART: These days, Luray Caverns covers 64 acres. The pathway that we follow through the caverns is about a mile and a ¼. It’s really hard to believe we’re just 90 miles from Washington, DC.

BILL HUFFMAN: Stalactites hangs from the ceiling down. It hangs tight to the ceiling-- that’s how I remember it-- and a stalagmites grows from the bottom up and it might reach the ceiling

STEPHANIE HART: Once they meet they form a column or pillar like this. This double column is the largest formation in the caverns- at 47 feet high. It’s absolutely magical! 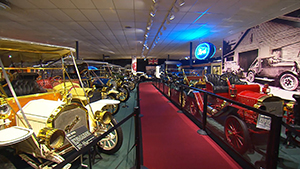 And the cave formations don’t just look pretty, they make beautiful music too. Thanks to help from this organ.

BILL HUFFMAN:Sure, one of our main features is Dream Lake which is a large body of water in the caverns which creates a perfect reflection of the ceiling. So, there are no stalagmites on the bottom-- what you see is an illusion, just the top, and it looks very deep but it’s not. Its deepest point it’s only 18 or 20 inches.

STEPHANIE HART: A dream come true for the former president of Luray Caverns corporation- H.T.N. Graves. As a result, he combined his love for the caverns with another love-his cars-- creating the Car and Carriage Caravan Museum next door in 1957. The centerpiece of the collection is this 1898 Benz Vis-à-vis. It’s one of the oldest automobiles on display in the country. As I learned, it has its original engine.

ROD GRAVES: This is one giant piston right here and as you can see the compression is really good in here. This piston was a one piston drive whereas today we have up to eight.  Pretty amazing start out of a basically farm engine applied to wheels.

STEPHANIE HART: A century ago, some people drove this Rolls Royce shooting brake to go hunting. This is the only shooting brake produced that year. Very few survive today. This 1912 Metz is known best for its friction type drive… that works like a clock mechanism. 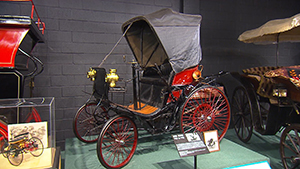 ROD GRAVES: You would get the automobile running enough to turn the discs and so there's very little fuel involved here and something that could be applied today.

STEPHANIE HART: This 1928 Mercedes-Benz Model S was one of the most powerful and heaviest cars of its time.

Fast and efficient, this horse drawn fire steam engine put out fires in the early 1900’s. Firefighters built up steam in the boiler, then the steam mechanism would pump water from a nearby water source, like a river, and extinguish fires.

ROD GRAVES: It was actually documented that it put out a very tremendous fire where many lives would have been lost so looking at that is humbling in itself.

STEPHANIE HART: Checking out the cars and caverns at Luray gave me the opportunity to celebrate the past, while at the same time making tons of modern memories. Resulting in an out of this world experience!