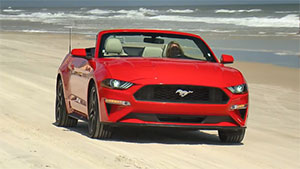 On the bucket list for many car enthusiasts is to drive their favorite muscle car on hallowed sands of Daytona Beach. After all, it's where stock car racing got its start over a century ago. Today that love of speed continues, just off the beach, at the Daytona International Speedway’s Motorsports Hall of Fame of America. Our Stephanie Hart takes us inside this fast paced museum that honors the greats in motorsports of all types.

STEPHANIE HART: We’re here in Daytona Beach cruising the strip in our candy apple red Ford Mustang convertible. What could be better than this? But if you’re going to do it, you got to do it right… that means turning off  A1A and heading towards the beach in our convertible. 23 miles of white sand beach to explore.

You can smell the ocean breeze, the wind in your hair… this is just an incredible experience. Today you can’t go over 10 mph on the beach or lifeguards will actually pull you over, but back in the 1920’s there was a whole different story. People raced on this beach…they raced stock cars. It was really popular…it was the in thing to do back then. 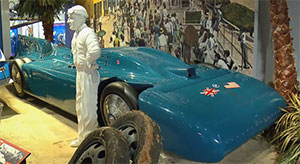 Historical markers tell the story… when there were few paved roads and Daytona’s hard sand was used as a racecourse. Speed and sunshine collided here. And legends were born. Those heroes of horsepower are honored today at the Motorsports Hall of Fame of America at the Daytona International Speedway. This 1935 vintage Blue Bird land speed record car is a main attraction. Built by British racer, journalist, and hall of fame member Sir Malcolm Campbell, it took to Daytona beach with an aircraft engine under its hood.

STEPHANIE HART: It literally flew nearly 277 miles per hour. And later that same year at the Bonneville Salt Flats it was the first car to go over 300 miles per hour. When Daytona-breed stock car racing and NASCAR were still in their infancy, most of the bragging rights went to the Hudson Motor Car Company. Their Hornets dominated the sport… thanks in part to its low center of gravity. 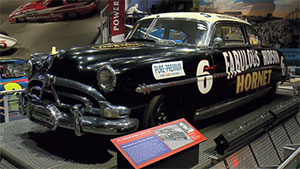 RON WATSON: Somebody always has an advantage by having one little thing better than everybody else, but their time lasted about three years in the early 50’s, but they were totally dominant. And reincarnated years later in the movie Cars in the character Doc Hudson that was voiced by Paul Newman.

STEPHANIE HART: The Motorsports Hall of Fame of America was founded in 1989. It moved from Michigan to its now permanent Florida home at the Daytona International Speedway in 2017. Upwards of 110-thousand fans of speed visit each year. The hall of fame has more than 200 inductees, covering all styles of motorsports.

RON WATSON: I think racing is in the blood especially of Americans. This hall of fame was founded to celebrate that spirit of competition in all of us.

STEPHANIE HART: There are also two Dale Earnhardt stock cars here one from early in his career the Wrangler #2 and then the famous Goodwrench #3 Chevrolet.  But it’s not just about fast cars, anything with a motor in it that competes is welcome. That includes motorcycles, powerboating and aviation. 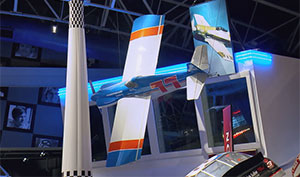 RON WATSON: General Jimmy Dolittle who later became a war hero was an air racer, Roscoe Turner and Amelia Earhart. These people were obviously household names. You would see Roscoe Turner’s name on the sports page next to Babe Ruth when aviation was in its hey-day so that’s something that’s part of history that people don’t really remember. There’s some kind of air racing going on now but not like it was in the Golden Age of Aviation so I think that’s very, very unique.

STEPHANIE HART: This is a one of a kind experience, capturing that timeless spirit of competition. The car culture is rich here, whether you the visit the Motorsports Hall of Fame of America or cruise down the beach with the top down. There’s no denying the automobile put Daytona Beach on the map.