“If you own an older or classic car, you know that as time goes by, good quality, original equipment replacement parts become harder and harder to come by. And when it comes to body and trim parts, nearly impossible. That quest is what lead our FYI reporter Lauren Morrison to Phoenix, Arizona where she hit the jackpot in junkyards.” 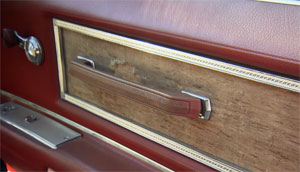 LM: “If you’ve seen MotorWeek before, you’ve probably seen the restored Cadillac that we’ve featured on the show a couple of times. Well, when the boys back at the shop found out I was coming here to Desert Valley Auto Parts, they gave me a mission. They want me to find a dark red interior driver’s side pull handle, for that Cadillac. Let’s see if I can do it.

JASON MCCLURE: “We started out as a little quarter acre lot. We’ve grown, we’ve moved about 6 times since then in a span of years, and basically now, we’re sitting on two 30 acre lots and we’re full.”

LM: AND WHEN JASON MCCLURE, OWNER OF DESERT VALLEY AUTO PARTS SAYS FULL, HE MEANS IT. WE’RE TALKING ABOUT 10 THOUSAND VEHICLES TO LOOK THROUGH!

JASON MCCLURE: “I’m proud to say that I’ve got the biggest antique junkyard in the world.” 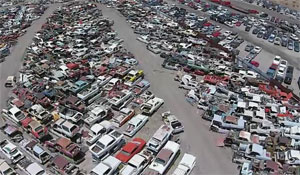 LM: BUT DON’T EXPECT TO FIND A PART FOR YOUR HONDA CIVIC AT THE PHOENIX, ARIZONA JUNKYARD.

JASON MCCLURE: “We deal mainly with 1975 and back, only American vehicles. We do just about anything. We don’t specialize in Mustang or Camaros. We do everything American across the board. Even, we call them the orphans, the AMC’s and what not.”

LM: “From wires, to wheels, or even a windshield or seat, if you need it, this place most likely has it.”

BUT BACK TO WHAT I’M LOOKING FOR…THAT PULL HANDLE! JASON PROMISES THERE IS A METHOD TO THE MADNESS. 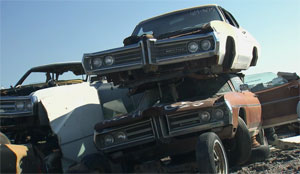 JASON MCCLURE: “It looks a little chaotic, but actually, it is very organized. If you’re looking for a Chevy Impala, they’re only going to be in one section, same thing with a Firebird or anything else.”

LM: AND IT’S IN A SECTION OF PICKUP TRUCKS THAT I SPOT CLIFF LUCENTE ON A MISSION OF HIS OWN.

LM: “Talk about a needle in a haystack.”

CLIFF: “This will make the seat operational. I can put the truck on the road.”

LM: SO I PUT *MY* HUNT ON HOLD TO LEND A HAND TO CLIFF TO SEE IF WE CAN *ACTUALLY* FIND THIS ACTUATOR CLIP. 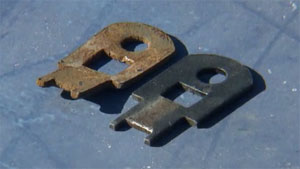 CLIFF: “We’re just going to poke through and see if we can’t find something.”

LM: AND IT WASN’T 30 MINUTES LATER…THAT CLIFF SPOTTED SOMETHING PROMISING.

LM: WITH A LITTLE BIT OF LUCK…

CLIFF: “You’ve got them both crossed.

LM: I’ve got them both crossed!

CLIFF: “I think that means we’re going to be successful.” “I think we have a winner!

CLIFF MADE A MATCH! HOPING THAT CLIFF’S LUCK RUBBED OFF ON ME, I PICKED UP MY SEARCH AND HEADED TO THE CORRAL OF CADILLACS. 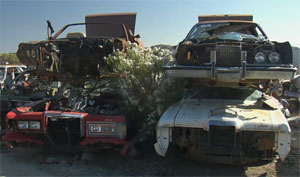 FACED WITH ROWS AND ROWS OF CADDIES, I BEGAN TO UNDERSTAND THE DESERT VALLEY AUTO PARTS TAG LINE.

Jason McClure: “Our tagline in our ad is pack a lunch and bring plenty of time because we really want you to spend as much as possible here.”

LM: WHILE THERE WERE SOME GLIMMERS OF HOPE…

AND SOME PRETTY COOL FINDS… 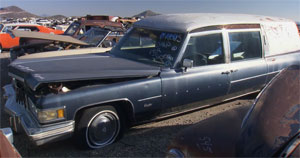 “I think I may have found the Griswold family station wagon…”

IN THE END THOUGH, I HAD TO PULL THE PLUG AND CALL IT QUITS.

“Well, the day is winding down and unfortunately, we didn’t find that inside door pull for our Cadillac, hopefully the boys back at the shop aren’t too mad about that, but this is a huge yard, and tomorrow is always another day!”