Driving in the Rain

As the seasons change, so should our driving techniques. Now most of us think we know how to drive in the rain, but the fact is we all could use a refresher. The numbers are startling - 1.2 million crashes every year. So here’s our Stephanie Hart with some smart advice on driving in a downpour. 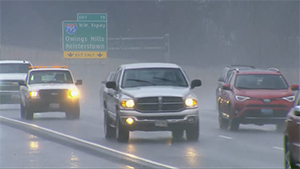 STEPHANIE HART: If you've ever been caught in a downpour while driving, then you know it can sometimes be pretty scary. Especially if you start to lose traction, a situation commonly known as hydroplaning.

It happens when a layer of water separates a vehicle’s tires from the ground. Worn tires on wet surfaces will significantly increase your hydroplaning risk although it can happen at speeds as low as 35 miles per hour even with new tires.

So if your car starts to hydroplane...what do you do? AAA has this advice:

KURT GRAY: Well the first thing you should do is to take your foot off of the accelerator, right. That’s going to shift more weight to the front of the vehicle and allow you to regain traction. What you don’t want to do is apply the brakes. Alright, so you want to stay off the brakes and allow your vehicle to slow down naturally. And if you end up losing control then you want to stay off the brakes again and look and steer where you want the vehicle to go.

STEPHANIE HART: Conditions are most dangerous during the first ten minutes of a heavy downpour. 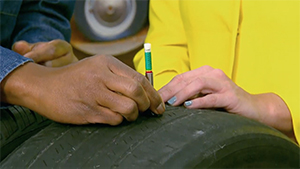 As we all know it’s extremely important to have good tires going into the rainy season. So Kurt, how can people check their tires to make sure they’re ready?

KURT GRAY: Well one way you can do it is to use a tool like this which is a tire tread depth measurer. Or you can reach in your pocket and use a quarter.

STEPHANIE HART: Ok, so show me how it works?

KURT GRAY: So this tool here, what you would do is extend the clip on the front, push it between the tire tread depth and you can see we’re at 1/32” a very unsafe tread depth here on this tire as opposed to a new tire 11/32”. so you have a brand new tire and a very old, worn down dangerous tire.

STEPHANIE HART: So how much does something like that cost? 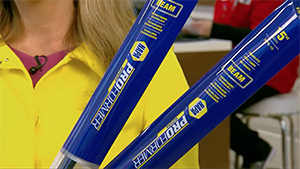 STEPHANIE HART: Four bucks, okay, so easy to use. And how does the quarter work if you don’t have that device?

STEPHANIE HART: If you don’t need new tires, make sure to inflate your tires to the manufacturer’s recommendations. They are normally found inside the driver’s door. Underinflated tires aren’t able to displace water like tires that are properly inflated -making driving in the rain potentially more dangerous.

While you’re at it, have your brakes serviced. It's also a good time to conduct a thorough checkup- we’re talking battery, lights and brakes. And if you don't have one make sure you put together an emergency kit.

In the end, it's all about driving with mother nature’s worst in mind. After all, no one is invincible, whether you’ve been driving fifty years or five.