Washington and the automakers are both encouraging consumers to embrace an electric car future with more affordable pricing and steadily improving ev driving range. But progress could stall if America’s charging infrastructure isn’t ready. Even with government support, it will largely be up to the private companies to make charging widespread and convenient. Stephanie Hart shows us how one leading charging network is working furiously to bridge the gaps. 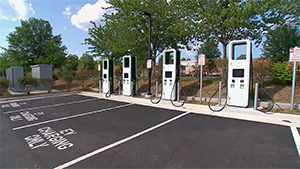 STEPHANIE HART: Electrify America has 650 charging locations, like the one behind me across America. Each location has four to six chargers. They’ve built this infrastructure up just over the last three years and it continues to grow.

ROBERT BARROSA: We go out across the country and look at where vehicle adoption is happening where people are traveling whether it’s on vacation or to work and then seek out those locations to put charging stations in.

STEPHANIE HART: Creating an army of fast chargers across the country. This is the future that is needed sooner rather than later.

STEPHANIE HART: But, how fast a battery electric vehicle can charge, and how little time it takes, depends on how it was designed.  We’ve come a long way in a decade. Long gone are the early days of EVs. You may remember the max charge rate was 50 kilowatts. A 20 minute charge would get 60 miles of range back. Now at 350 kilowatts, drivers charge for 20 minutes and get almost 400 miles of range back. And it’s only going to get better, as technology gets better. At Electrify America, advances in technology, and customer convenience, starts at their center of excellence lab. We went behind the scenes to take a closer look. 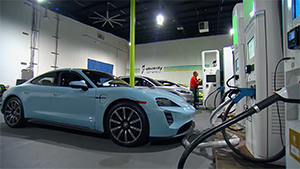 ROBERT BARROSA: Various automakers are making electric vehicles today so that infrastructure needs to communicate in a certain way to the charging stations we are putting out. So it’s vital we test ever vehicle that comes to market so that we can insure the best consumer experience and a no issue charging experience for that consumer.

STEPHANIE HART: President Joe Biden has set a goal that 50-percent of all new cars on the road by 2030 will be EVs. Will our charging infrastructure be ready, that’s the question.  Electrify America says yes, but there’s a lot of work that still needs to be done.

ROBERT BARROSA: We work very closely with city and state governments to improve permitting processes to make things more streamlined and faster. We also work with utilities to help understand their processes and let them understand the needs of electric vehicle charging infrastructure and what we need to deploy and together we are helping to improve the overall process to make timelines shorter to get that infrastructure built out.

STEPHANIE HART: Electrify America and other major charging networks know it won’t be easy. But the ultimate goal of protecting and preserving our planet for future generations is worth it.