You’ll find some of the best driving roads anywhere along the Blue Ridge parkway in North Carolina. But at the end of the day, you still want a place where you can pull in and kick back. Well our FYI reporter Lauren Morrison found the spot where gearheads go to relax.

LM: IN BETWEEN SOME OF THE BEST CRUISING ROADS IN THE COUNTRY…

MARY FOX: “…few minutes, to the Tail of the Dragon… few minutes from Cherohala Skyway…” 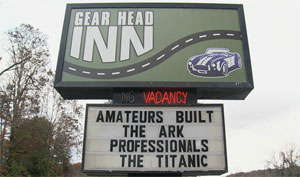 MARY FOX: “They drive by and our name catches their eye. If they’re gearheads, they know what that means.”

LM: “And what’s the Gearhead Inn without a couple of gearheads hanging around with their cars, like this 1939 Chevy.”

IT WAS RIDING THESE ROADS THAT MARY FOX AND JIM SEARS CAME UP WITH THE CONCEPT. 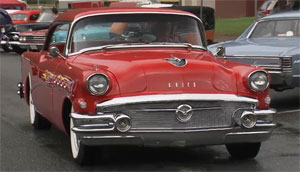 MARY FOX: “We were up here on vacation, riding the Blue Ridge Parkway, which I love, and saw these beautiful old muscle cars, and in talking, while we were riding, came up with this idea, which developed over the course of the evening into the Gearhead Inn…9 months from the day, from the time we had the idea, we were here.”

LM: THE ATTENTION TO DETAIL THEY TYPICALLY PAY TO THEIR CARS…

JIM SEARS: “It’s been a little while, we have priorities out there.”

LM: Now goes to transforming each one of the inn’s 23 rooms into a moment in the muscle car era.

JIM SEARS: “I make the emblems, make things for the rooms.”

MARY FOX: “We ended up buying old poster of ads from magazines from that era, pictures of cars from that era. Whatever we could find. We had nothing.” 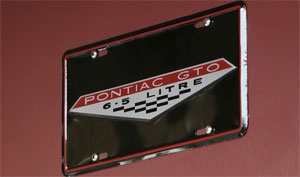 MARY FOX: “After we got here, we discovered that not only do the muscle cars love these roads, but there’s a lot of motorcycles.”

LM: You’ll find a space to park your Indian or your Harley, which comes in top spot.

MARY FOX: “And the Harley-Davidson is our single most requested room.”

LM: “Much like the older cars you’ll see in the parking lot, when you step into a room, it’s like stepping back in time. You’ll notice a lot of this furniture is from the 60’s…and that’s no mistake.” 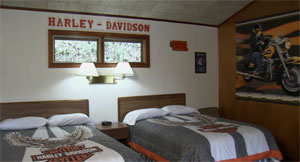 MARY FOX: “We found an old place in Atlanta that had 60’s furniture from motels and went down with our truck and trailer and purchased a bunch of the cool stuff in the back of the warehouse.”

LM: Each room will have you dreaming of years gone by…or that dream car…”for me?!”…but back to reality….which seems too good to be true…I mean, what kind of place *encourages* burnouts?!?!

Yes, that was me whipping around in the front seat of the 65 cobra replica that Jim is working on…

LM: But it’s not just the rooms they’re selling, but the gearhead lifestyle.

MARY FOX: “People have made friends here with other people of a like mind, which we find heartwarming.” 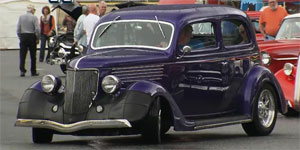 LM: With cruising and car shows like this one that was happening while we were in town, customers aren’t hard to come by.

“Would you say you’re a gearhead…love cars?

OWNER: “I’m a real gearhead. Have been since I was a young boy.”}

LM: Whether you’re all about the AMX, or crazy for the ‘cuda, pump those brakes and pull on in, because gearheads gather here.