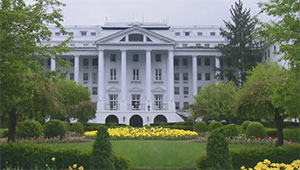 The Greenbrier is a posh 11-hundred acre mountain resort in West Virginia. It’s hosted numerous presidents, royalty, and countless celebrities. But it has never hosted a Concours d’elegance, until now that is. And, it was world class, with everything from brass era motorcars to pre-war production models to the most exotic of sports cars. Our Stephanie Hart was there, as she now shows us the cars that impressed us the most.

Stephanie Hart: The Greenbrier is surrounded by West Virginia’s majestic Allegheny Mountains. The views are stunning! The resort is a national historic landmark… dating back more than 235 years!

“There is just this sense of peace that’s present here.”

And as you can imagine a lot of history. 27 presidents have visited here. So, commemorating the past and celebrating the future is at the heart of this charming resort. 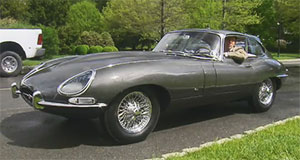 “Automobile enthusiasts from around the country are converging here at the Greenbrier to celebrate the history of the automobile.”

Stephanie Hart: This elegant venue was the perfect setting for May 5th Concours d’Elegance… featuring 100 of the finest automobiles in the world.

Judges score the vehicles based on originality, condition, authenticity and appeal.

“These were so low in production at the beginning that a lot of the roof structure was pop riveted together to check the fit and then come back and spot weld them so it’s almost a pre-production type automobile.” 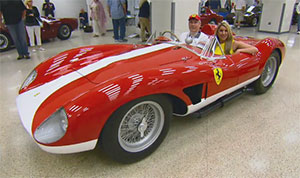 Stephanie Hart: Inside the Greenbrier, surrounded by all this beauty, is where the rarest and most expensive automobiles are being kept.

Under lock and key - in the bunker room. The bunker was once a top secret U.S. government relocation facility for congress.

“This is the car everyone wants to see - the 1957 TRC Ferrari. It’s owned by Mr. Marriott of Marriott hotels and its caretaker is going to tell me a little bit about this incredible vehicle.”

“They made 19 of these cars. They’re four cylinder and two liter car. It’s a gentleman’s racer for that period.”

Stephanie Hart: J.W. Marriott actually decided to sell the car in 1990. He made ten times his investment – in just seven years. But as the saying goes money can’t buy happiness. 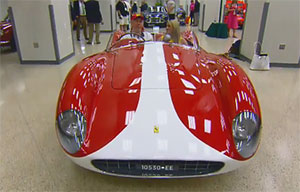 “He regretted selling it because it’s his favorite car out of the collection and he has about 40 cars.”

Stephanie Hart: What did he do?  – well when you own the Marriott empire – you buy it back of course!

Today it’s worth 5 million dollars or about the same as 250 Toyota Corollas.

Stephanie Hart: Would he mind that I am sitting in the car?

“No, no he would be smiling and thinking well this is fun!”

But not nearly as fun as driving it!

“And when you drive it what kind of looks do you get?”

“A lot of thumbs up and people give you strange looks they’re like what is that noisy little red car.” 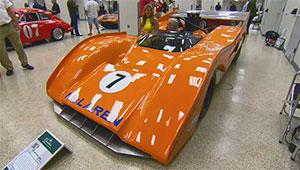 Stephanie Hart: Another car that made my heart race… this 1972 McLaren Can Am. It has 860 horsepower and thanks to its aluminum chassis, it weighs less than a Volkswagen beetle.

“It is really like a ballistic missile when you drive it they don’t corner very well but the idea was to roll it through the corner and get it squared up and then you lean on it real hard and it just goes."

“It’s a privilege to drive something like this because one it’s a piece of history and two there is a sort of financial commitment to be able to do it.”

Stephanie Hart: So how much are we talking? 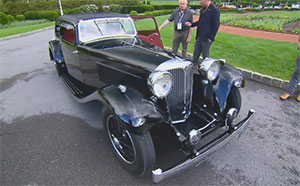 He won’t tell me.

“Lets just say it has a significant value.”

Stephanie Hart: Ok, we’ll leave it at that.

This Concours’ has dozens of remarkable cars… all out of my reach… so…. I had to get a few pictures.

Best in show for the inaugural Greenbrier Concours d’Elegance goes to the Baxters and their car produced by the Swallow Sidecar Company… what we now know as Jaguar. It was produced in 1934. And is one of six with all its original running gear.

Stephanie Hart: Well all good things have to come to an end sometime, hats off to the winner and an unforgettable experience.