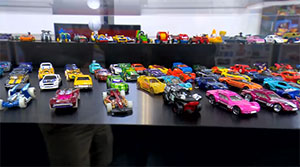 This year marks a big milestone for a miniature car brand that’s loved by kids of all ages, as well as coveted by collectors worldwide. I’m talking about Hot Wheels, as it turns 50 years old! So, what better time to examine the past, present and future of this iconic nameplate. Our Stephanie Hart had the rare chance to go behind the scenes at Mattel... where Hot Wheels got their start.

STEPHANIE HART: Hot wheels was born in 1968. Mattel’s co-founder Elliot Handler dreamed of a better toy car for boys-a car that looked cooler and performed better. He got his wish! A General Motors car designer and a rocket scientist came up with the first ever trackable toy car. 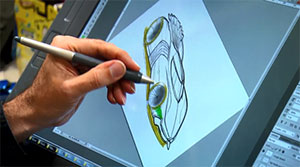 Bryan Benedict: Ok let’s get another layer going in here.

Stephanie Hart: Bryan Benedict is one of fifty Hot Wheels designers. The team is made up of experts from many different industries. Like major auto manufacturers, entertainment studios and the toy industry.

Bryan Benedict: What I’m working on here is kind of like my idea for a new supercar so it’s not something that exists it’s just something out of my crazy mind.

Ted Wu: Half the cars designed here are imaginary. The other half are based on existing vehicles.

Ted Wu: Here at the Hot Wheels headquarters we can actually create 3-d versions of what the guys are thinking and then we work with our manufacturers in Asia to actually create the final product you see in stores 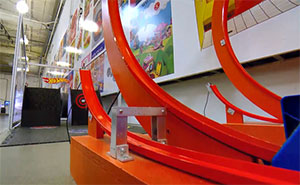 The iconic orange track system has always been a part of the Hot Wheels brand. More than six-thousand miles of orange track are produced each year. Why orange you may be wondering? Well Hot Wheels says it’s because kids are attracted to bright colors.

Stephanie Hart: It’s easy to feel like a kid again especially with this big orange track. Alright let’s give it a go. Not bad.

Chris Down: Everybody that has played with hot wheels in their head imagines what it would look like or what it would be like to drive it on the road or to see it in real life.

Not many people are allowed inside… so we’re really excited! 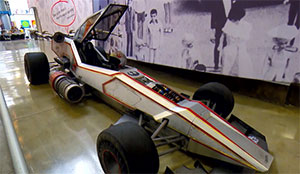 Stephanie Hart: From the 1:64 scale die cast, to the real thing… let’s take this car out for a spin.

Bryan Benedict: This 20-18 limited edition Hot Wheels Camaro is commemorating Hot Wheels 50th anniversary. Twenty vehicles make up the Hot Wheels fleet. This is the way to go in California. Top down.

Stephanie Hart: And get a good look at this one! “may the force be with you” this Star Wars Hot Wheels pumps out 175 horsepower and hits 180 miles per hour. 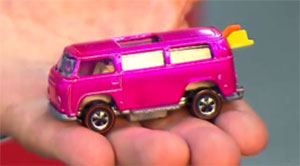 Die-hard collector Bruce Pascal owns it. There are only forty known models in the world.

Bruce Pascal: It’s absolutely amazing though if you think about it your grandfather played with them, today their son played and their grandchildren. It’s multigenerational just not that many toys that are such an American success story.

Stephanie Hart: Capturing the hearts of collectors and kids for half a century.

The Hot Wheels die-cast car is the number one selling toy in the world, are produced every second. And its price remains the same, fifty years later, just a cool one dollar a drive!