Modern hybrid gasoline-electric cars have been around for over 20 years now, and the excellent longevity of their batteries is well documented. Still, here at MotorWeek, we are constantly asked…”what happens when the battery fails?” Well, FYI reporter Stephanie Hart has found a green mobility firm that’s ready with answers. 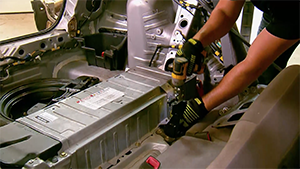 STEPHANIE HART: In 1999, the Honda Insight became the first modern gasoline-electric hybrid car to be sold in America. But it was the Toyota Prius that made hybrid driving popular here. Like any new automotive technology it didn’t take long for independent repair shops to pop up that specialize in routine repairs on hybrids. We visited one, the Luscious Garage in San Francisco, back in 2013. But now that hybrids have been around for two decades, major parts are starting to fail, and that includes the hybrid’s battery.

We now know it can take 10 years or 100,000 miles before a hybrid battery loses serious muscle. For most hybrid vehicles, aftermarket replacement battery packs can be ordered online or through your local auto parts store. But, more than a few owners of hybrid cars have learned the hard way that a unexpected battery failure can leave you stranded. That’s where Greentec Auto enters the picture. They are a service company that not only sells new and refurbished hybrid battery packs, but will install them for you as well, and they even make house calls!

I’m here in Bowie, Maryland at one of their shops and let’s take a closer and watch as they install those EV batteries.

PAUL RAZUMOVSKY: We re-manufacture and manufacture EV batteries for cars that are losing their range and miles per gallon. 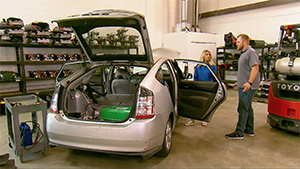 STEPHANIE HART: Paul Razumovsky and his family built Greentec Auto from the ground up, keeping pace with the now aging fleet of first- and second- generation hybrid cars.

PAUL RAZUMOVSKY: So we started about ten years ago in the back of our dad’s repair shop. We grew up working on hybrid cars- all kinds of cars actually changing oil, changing tires, brakes, and our sister had a Prius and her battery went bad and we looked online and we tried to reach out to repair shops to see who could fix her battery and there was no one out there so we figured out how to fix them –figured out a way to make them work and last and eventually stumbled upon the business.

STEPHANIE HART: At the time, there were few aftermarket and independent service options. Drivers were forced to replace dead batteries at the dealership- paying top dollar. Green Tec Auto’s goal is to offer a more affordable solution. Their main battery pack distribution facility is in Kansas City where they ship battery pack to their 21 shops around the country.

If that dreaded red triangle of death comes on, technicians here can save the day. They can come to you and install a new battery at your home, your work or even if you’re stranded by the side of the road. 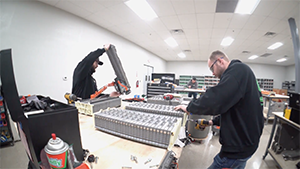 PAUL RAZUMOVSKY: We do have a proprietary method that we’ve developed in the last ten years on testing these batteries. When we receive a core from a customer we go completely through it- refurbish-replace the parts that need to be replaced- test the batteries and whatever we can use we use and what we can’t use we recycle the right way.

STEPHANIE HART: Nothing ends up in a landfill. And if it’s a higher capacity battery that won’t work in a car they find a second life for it- some end up being used as backup power for golf carts. Paying it forward, while preserving the environment.

PAUL RAZUMOVSKY: It’s not the battery, a lot of times these cars have inverter issues or transmission issues. We will do whatever we can to fix the car. We’re not here to just change the battery.

STEPHANIE HART: America is moving towards an electrified driving future with plug-in cars that have batteries  hybrid. As they become common, it is clear that more entrepreneurs like Greentec Auto will emerge to make sure our clean driving future stays in its lane, and not on the side of the road.