We talk a lot about alternative fuels here on MotorWeek. CNG, propane, bio-diesel, e85, and of course plug-in battery-electric. But the promise of a super clean driving future powered by hydrogen has always been described as years away. Right now in California, however, you can actually buy and drive your own hydrogen powered fuel-cell car. And, what’s that personal experience like? We sent our FYI reporter Lauren Morrison to find out.

LAUREN MORRISON: Just this year Honda, Hyundai, and Toyota all debuted production ready hydrogen fuel cell vehicles, although initially they will only available in limited areas. 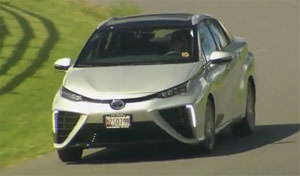 In fact, a fuel cell vehicle actually “is” an EV, but it makes its own electricity from hydrogen. There’s no need to plug it in to re-charge. To see just what one drives like, I jumped behind the wheel of a Toyota Mirai sedan. Much like a traditional EV, things are very quiet, and had me asking, “is this thing even on??”

But, with the popularity, and petrol hungry reputation of SUVs, it seemed only natural for me to check out this new hydrogen Hyundai Tucson as well…and again, the drive was very similar to a battery electric vehicle, with that really quick get up and go.

So why hydrogen over battery electric? For one, the time it takes to refuel.

Dr. Sunita Satyapal: “So, it just takes a few minutes to fuel, so there it’s more similar to a gasoline vehicle as opposed to charging the battery.”

Another plus for hydrogen vehicles? Their range. 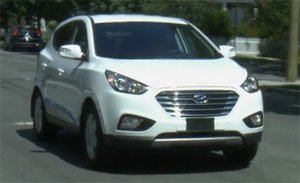 The EPA estimate for the Toyota Mirai I drove is 312 miles…the Hyundai Tucson boasts 265 miles per tank…and each one of those miles is pollution free.

“The only kind of emissions that come out of hydrogen electric vehicles are a little bit of heat and H2O.”

Even considering the energy, it takes to produce, deliver, store, and transport hydrogen, or what the fuel cell technologies office defines as well to wheel emissions, hydrogen comes out ahead.

Dr. Sunita Satyapal: “If you look at today’s gasoline vehicle, on average, based on all the assumptions, we have roughly almost a pound of carbon emissions per mile of driving. If you’re producing hydrogen from natural gas, there’s about half of that in terms of emissions of total well to wheel emissions.

So why aren’t we all driving hydrogen vehicles?? Well, it starts with the high cost of the fueling stations, the fuel cell vehicles, and the hydrogen fuel itself. 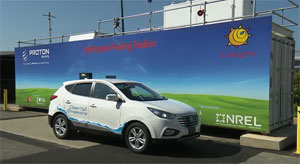 But, the west coast, California in particular, is making strides.

Similar to other alternative fuels, collaboration seems to be key in making hydrogen more mainstream. Take this fueling station in Washington, D.C. It’s a partnership between the Department of Energy and the National Park Service.

And with the station right in their backyard, the Greater Washington Region Clean Cities Coalition is making moves too, talking with DC government about purchasing hydrogen vehicles now that a station is logistically available.

Ronald Flowers: “Washington, D.C. has over the years been an innovator as it related to alternative fuel programs and I see, again, the District of Columbia government and Department of Public Works making some major efforts to bring hydrogen to the city.”

Other than California, the 3 automakers have yet to announce which market areas the fuel cell vehicles will be offered in next.  But after my drives, there’s no denying the potential and practicality of hydrogen powered cars. So, this time the future of this future fuel looks like it may be much sooner than we thought.