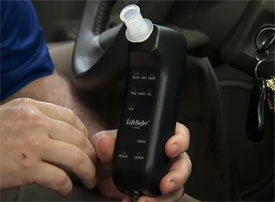 With all the constant talk about distracted driving being a highway menace, we tend to forget an even more serious menace, drunk drivers. Now despite decades of warnings and lots of legislation, people still drink to excess and drive, often with deadly results. Our FYI reporter Yolanda Vazquez shows us an electronic effort to stop DUI before it starts.

AUDRA JOHNSTON: And I can remember holding on to the steering wheel and saying got to be more to life than this.

YOLANDA VAZQUEZ: She received her first dwi at age 21. With nothing more than a slap on the wrist, Johnston continued her drunk driving ways.

AUDRA JOHNSTON: Up until my 3rd DWI, I really did not care and I think unless you’re an alcoholic you’re not going to understand it. 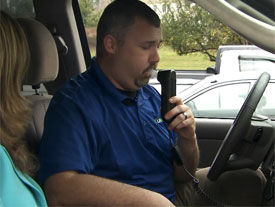 YOLANDA VAZQUEZ: After her third offense, Johnston was given the option to participate in an ignition interlock program. This is where a company--authorized by the state--installs a breath analyzer device—that looks somewhat like a cell phone---into a person’s vehicle to test their blood alcohol content before they drive. Life safer state director Bill Chastain demonstrates the breath test

BILL CHASTAINl: Once it goes to blow go ahead and take the test.

YOLANDA VAZQUEZ: Chastain says there’s a certain way you must blow into the device for it to record the proper blood alcohol content level—making it difficult for just anyone to do it.

BILL CHASTAIN: It has a hum tone that’s built into it so it’s not as easy having somebody jump in and take the test. They have to know how to take the test properly.

YOLANDA VAZQUEZ: Once you blow into the unit, it will emit a green “pass” light letting you know it’s okay to start your car. If it detects a small trace of alcohol, a yellow warning signal appears. If your b-a-c exceeds the state’s legal limit, a red “fail” light comes on. This means your vehicle will not be able to start. All of the “breath tests” and other pertinent information are recorded. The participant must bring in their vehicle every month to transfer the information from the ignition interlock device to a computer. That data download is sent to the state’s motor vehicle administration for review. MVA Deputy Administrator Chrissy Nizer says if they find any violations—and there’s a long list of them-they’ll extend the program by a month--for each violation.

CHRISSY NIZER: So it’s to try to teach them that look, we have to change your behavior to make you a safe driver again and try to get you down the right path. 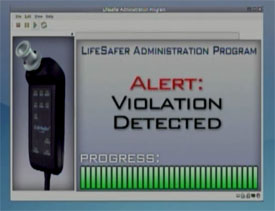 YOLANDA VAZQUEZ: Maryland has the highest participation -per capita-- on the east coast in the ignition interlock program with close to 10,000 people. Every state has some type of ignition interlock requirement and some states like New York make it mandatory for “first-time” offenders. While these in-car breathalyzers are a great technological tool in the fight against drunk drivers-- Nizer warns they’re not a cure-all.

CHRISSY NIZER: The recidivism rate while on ignition interlock device is good because obviously they have to comply with program in order to be able to start vehicle and continue to drive it…what happens after that is always a difficult part in terms of really changing that behavior.

AUDRA JOHNSTON: I hated it, the interlock was pain in the butt that I had…it was the money, it was the inconvenience of going every month.

YOLANDA VAZQUEZ: Johnston tried every trick in the book to avoid blowing into the device. Once off the program, she received her 4th dwi at age of 39 and spent 17 days in jail. It was a wakeup call for her destructive behavior.

AUDRA JOHNSTON: I had to hit my bottom before I finally said, ok I’m done.

YOLANDA VAZQUEZ: This time around, Johnston gladly participated in the ignition interlock program. She’s been sober now for four years and believes the high-tech dui deterrent saved her life and the lives of others.