Land Rover is well known for putting their SUVs to the test in the world's most rugged surroundings. But, in a first-of-it's-kind experience, Land Rover put owners, along with guest professional athletes and yes, even members of the press, to the test right alongside their new Defender Trophy Edition. The challenge? To compete in extreme off-roading while also facing a variety of technical, physical, and communcation obstacles! Amonth the competitors: our own Stephanie Hart. So, from the Blue Ridge Mountains, here's how it all turned out.

STEPHANIE HART: I’m here at the beautiful Biltmore Estate. Fourteen teams of two are going to be competing on four thousand acres here closed to the public. We don't know a whole lot about this competition, but organizers handed me this bag. It has a GPS in it, a Garmin, there’s food, I have bug spray here and work gloves. So no pressure; not really sure what I’ve gotten myself into, but I’m excited about the competition. Please, wish me luck! 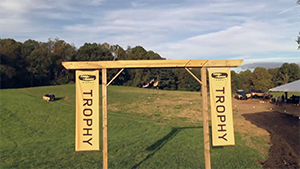 First task: find a Land Rover Trophy Edition Defender. Not as easy as you would think…

And truth be told, I have never driven any Defender-classic or new- before. And never participated in a competition like this. Plus with only a week’s notice… there was no time to train.

The deep mud and wet leaves didn’t help. It was chilly, but humid. Refreshing, yet exhausting… and the bugs were out!

The night before, my partner, Freelance Journalist Andrew Ganz, and I made this flag. We decided to call our team, #11, “Journalost.” After all, one of our worst fears was getting lost!

And did someone say bear…

After getting a little turned around, we found our way and our Defender. Getting into the driver’s seat and cranking the AC felt like heaven.

Turns out, I’ll be spending about six hours behind the wheel out in the wilderness competing in this navigational and endurance competition. AKA getting way out of my comfort zone! 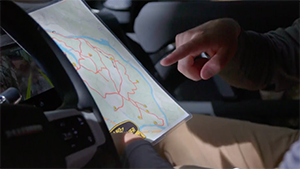 We’re awarded points for our ability to complete special tasks-accurately and quickly, racing the clock. The highest score wins. As I found out, there were a lot of off-road challenges… which I really liked! Product knowledge tasks, physical challenges, and more.

“Okay I just pulled up at our 4th challenge and this one isn’t going to be easy at all. it's going to require a lot of muscle and a lot of strategic thinking, but I think we can do it. We can do it. Got to think good thoughts. It would be helpful if Pat Goss was here; we have to channel our inner Pat Goss for those tips to get us through this one.”

I’ve never used a hi-jack before… not many people have. Thankfully, an instructor was there to give us pointers. We used muscles we didn’t know we had. And my partner was a huge help. In the end, we learned something… and didn’t lose a limb.

Some tasks were definitely more difficult than others. And we were competing against two time Olympic gold skier Ted Ligety and former pro volleyball player Gabby Reece.

“I’ve never done this before… My partner is guiding me. I’m steering and in neutral… it's gently pulling us up the hill.” 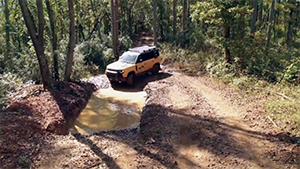 TED LIGETY: It's really cool to be able to drive the Defender in a way you would never drive your own car, you know; getting up on two wheels at times and going down some steep, really bumpy, gnarly stuff. Stuff you would never really do on your normal day-to-day so that was really fun and surprisingly challenging.

STEPHANIE HART: We got ourselves into some tough driving situations, but as the hours passed my confidence grew. Owners told me they felt the same way.

AVI GUROWITZ: It was just very rewarding being able to use the technology within the vehicles and see everything being utilized as it should be instead of just something to look at.

STEPHANIE HART: Once the clock stopped, it felt fantastic to unlace my boots… already sensing my muscles were mad at me.

ANDREW GANZ: You [expletive]. No-- As a partner you were awesome. You had a really positive spirit, you were eager to do everything, you were adventurous, you were out there pushing yourself beyond your comfort level, which I think this event is kind of designed to do.

STEPHANIE HART: At the end of the day, points were tallied…My partner and I didn’t do half bad. We won second place in the qualifier round for our wave. But when it’s all said and done, it’s not about who wins or loses, but about the adventure…and all the great Land Rover memories that will last me forever.