We've seen our fair share of car collections here at MotorWeek, from the wild and wacky, to some that are truly iconic. Well, Yolanda Vazquez has found one in Brookline, Massachusetts that makes quiet a bold claim: America’s oldest car collection. So we just had to see for ourselves. 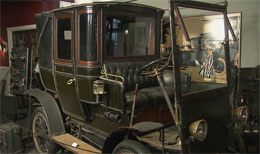 YOLANDA VAZQUEZ: It’s known as America’s oldest car collection, and vintage vehicles that date back to the 1890s, it’s easy to see why the Larz Anderson Auto Museum is a sight to behold.

VISITOR: I love it. I’ll be back. This is a great place.

YOLANDA VAZQUEZ: The fourteen cars on display were originally purchased by Isabelle and Larz Anderson, wealthy socialites who were intrigued by a variety of vehicles both European and domestic.

SHELDON STEELE: So they were…pioneers, if you will, of the motoring age. And they were early enthusiasts, so I think Mr. Anderson, and Mrs. Anderson…their favorite car, was the next one. 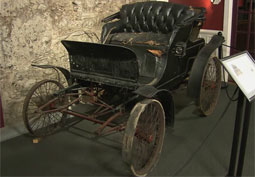 YOLANDA VAZQUEZ: Executive Director Sheldon Steele says the Andersons bought a new car nearly every year, with technologies ranging from steam to electric. It all began with this 1899 Winton Phaeton. It resembles a horseless carriage, with padded seats, buggy springs, and gas lamps on the side. One of only one hundred made, it uses a steering tiller like a boat.

Two years later, the technology progresses. Notice how this 1901 Phaeton has a steering wheel.

SHELDON STEELE: So innovation and evolution…the gradual change over time. ..

YOLANDA VAZQUEZ: And the Andersons spared no expense on their vehicles, from this 1907 six cylinder engine Fiat, that was considered a rocket ship in its day, to this 1906 C-G V, that made its trans-Atlantic journey from France.

YOLANDA VAZQUEZ: And despite its many amenities, like a bench that folds into a bed for long rides, the one thing everyone comments on, is the porcelain commode.

SHELDON STEELE: So, no matter what we’re hawking, or displaying, or exhibiting, people always walk away talking about the car with the toilet. 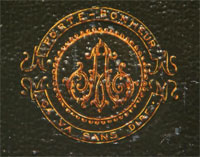 YOLANDA VAZQUEZ: And here’s something interesting that most people don’t notice: the Andersons’ monogram is painted on each and every car, along with a nickname. Some say it represents the qualities of that particular car; but others believe that because the Andersons didn’t have any kids, naming each car was like naming one of their children.

BARBIE JETTER: It’s great…it’s great. I’m just enthralled by all the cars here. I’m seeing cars I’ve never ever seen before, and I know a lot of old cars…

YOLANDA VAZQUEZ: Local resident Barbie Jetter is not only fascinated by the cars; she’s also taken a liking to Isabelle Anderson. She was the first woman in Massachusetts to get her driver’s license. And was often seen driving around town in this 1908 Bailey Electric Phaeton.

BARBIE JETTER: Lucky lady…really. And the fact that she’s sharing this…I wish that more people were aware of this.

YOLANDA VAZQUEZ: Unlike most museums, where the car collection is pristinely restored, Steele says the vehicles in the Larz Anderson Auto Museum are featured in their original condition. They look exactly as they did when the museum first opened in 1949 and were housed in this exquisitely designed carriage house.

SHELDON STEELE: The car world is starting to, more fully embrace the concept of preservation, because is only original once.

YOLANDA VAZQUEZ: That preservation versus restoration theme is part of an on-going exhibit at Larz, where this dusty 1939 Packard begs that age old question…along with these two ’53 Vettes , parked side-by-side.

SHELDON STEELE: You can see the original, factory installed gaps in this Corvette. It tells a story, but the two together a better story.

YOLANDA VAZQUEZ: But perhaps the best story of all is the unyielding enthusiasm this Massachusetts couple had for the distinctive vehicles of their day, and their long held desire to share them with the world.

SHELDON STEELE: So many wonderful cars in this collection. People just have to come and see us. It’s fabulous.