Maybe you've played with one of these, or even started your own collection. For many car enthusiasts, Matchbox cars were a must have in their toy collection. The attention to detail; the ability to mimic the original car designs was dead on. Now more than seventy years later, people are still buying them. And, our FYI reporter Yolanda Vazquez went to Pennsylvania to catch caught up with some tiny car fans. 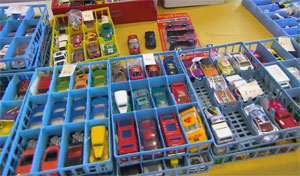 YOLANDA VAZQUEZ: From a box full of beaters to rare and precious pieces, there’s no limit to the variety of small scale toys on display at the Matchbox die cast car show in Hershey, Pennsylvania.

AUSTIN GEMBERLING: …you know I go to Walmart and stuff to look at the cars, but this is amazing…

YOLANDA VAZQUEZ: Now in its 4th year at the Antique Automobile Club of America Museum, the show draws quite a crowd…

YOLANDA VAZQUEZ: …and is one of the largest Matchbox shows in the country. Stephen Allen collects and sells these tiny toy car gems. He says the level of detail for each collector varies.

STEPHEN ALLEN: advice that I give other collectors in this field is: buy the best quality that you can afford. 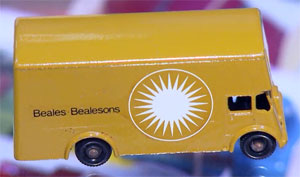 YOLANDA VAZQUEZ: And while some are dirt cheap, others cost a pretty penny. Like this brown truck that Matchbox made for the Beales Bealeson Company.

STEPHEN ALLEN: What’s interesting, this car was never made for sale. It was delivered to Beales Bealesons as a promotional item to give away to their clients.

YOLANDA VAZQUEZ: Allen says it sells for about 1200 dollars and doesn’t even come in a Matchbox box.

Searching this treasure trove of cars requires a bit of research and knowledge. Co-promoter, Ron Slyder, says there were only 75 models originally made by Matchbox. But each model had a number of variations.

RON SLYDER: …so you may have black wheels on one, metal wheels on another, one might be a different color…all these variations people looked for and they were all catalogued.

YOLANDA VAZQUEZ: Catalogs like these, Slyder says, is when the real collecting began.

RON SLYDER: Now they’re down to the axles and the insides and the base plates. They have it down to a science; every model.

YOLANDA VAZQUEZ: Slyder has a carousel of cars for sale- but his most prized possession are these two pieces. They’re sample colors that were never put into production.

YOLANDA VAZQUEZ:  And you’re looking to sell it for…?

YOLANDA VAZQUEZ: And while you’ll see Matchbox cars from the Superfast era or Hot Wheels craze- don’t forget there are two other names in the mix. Dinky Die Cast Toys and Corgi.

BOB PORCJA: Corgi die cast started production in 1956 and they were produced in Swansea, S. Wales… 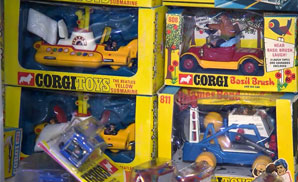 YOLANDA VAZQUEZ: Bob Porcja says the main difference between Corgi and Matchbox –back in the 1960’s -was the cost.

BOB PORCJA: More often than not, they used to go to department stores, and they were able to afford a Matchbox toy for approximately 49-55 cents. Corgi toys were much more expensive back then, so consequently the number of people that were able to afford those particular toys was not that many.

YOLANDA VAZQUEZ: Like with any collectors’ item, the more you have of it the better, right? So when these Matchbox cars first came out, a lot of people didn’t pay attention to the box, and simply tossed it away. And now today the box is sometimes just as valuable as the car itself. 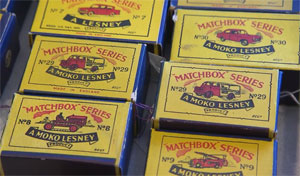 YOLANDA VAZQUEZ: From the widow who decides to sell her husband’s beloved collection…To the parent who turned her son onto these miniature models…

DARLENE GEMBERLING: I saw these cars and started collecting them…I thought he’d like them. I had no idea it was going to turn into this.

YOLANDA VAZQUEZ: … there’s definitely a camaraderie within this community. Whether you’re new to the hobby…

YOLANDA VAZQUEZ: …or have been collecting them for decades. This annual show is a Matchbox made in heaven for everyone who loves these itty-bitty cars.