What the future holds for the automobile is fascinating, but at times baffling. Scores of automotive researchers at the University of Michigan are working hard at trying to bridge the gap between cars we know and love today, and the automated and driverless cars planned for tomorrow. Our Stephanie Hart had a rare opportunity to explore the grounds of their Mcity testing facility for a look at how the next generation will ride.

Stephanie Hart: M city is unique. It’s designed to test connected and automated vehicles. It’s the only facility of its kind in the world. 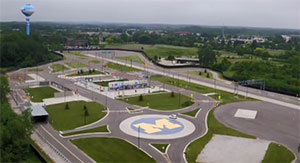 It almost looks like a scene out of a movie and that’s exactly what it’s supposed to look like. It’s supposed to replicate a real city complete with traffic lights and street signs. It’s tucked away on the university of Michigan campus in Ann Arbor.

Carrie Morton: Looking at legal liabilities. Insurance, privacy, cyber security trying to understand how to test and make sure technologies are safe.

Stephanie Hart: Not many people get to visit this facility, so we’re glad we had the chance!

The future of level 4 autonomous driving is pretty amazing. We’re going to take you through M city and show you a test scenario. 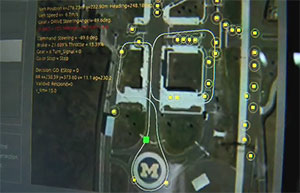 Our vehicle shows up as this green square on this iPad. The yellow squares all around us are virtual vehicles essentially the cars are connected and actually talking to one another, about the environment around them.

Stephanie Hart: You mentioned there’s 300-thousand dollars worth of sensors on this car?

Greg McGuire: That’s right. These sensors aren’t cheap. But that’s because they’re state of the art and not made in high volume yet just like DVD players used to cost 1,000 and now they’re $10.

Autonomous vehicles have certainly come a long way since they first burst onto the scene in 2013.

Greg McGuire: We will take a left and go to our rail crossing we should have a commuter train that’s scheduled to come through right now and here it comes. We stop for that and you notice we are stopped back a bit, that’s because there is a vehicle in front of us, a virtual vehicle. 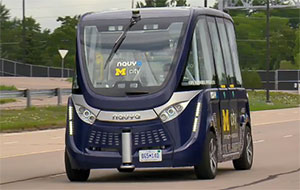 Stephanie Hart: In reality, transportation that looks like this is still a long way off. However, self-driving shuttles, like this one, could be on our streets in the next couple of years.

This one, and others, are already moving students around campus. We stepped on to try it out. It operates similar to the level four autonomous car we tested out earlier.

Carrie Morton: When we first see these shared level 4 vehicles they might be operating in small, urban environment, or even as what we call first mile last mile transportation. Moving me from my commuter lot to my home, at the end of my bus ride after work or a train ride… so providing a connection into a more established transit system.

Stephanie Hart: The big question? Will we ever be able to trust these self-driving vehicles.

Recent studies show 70% of Americans are scared to share the road with an autonomous vehicle. And only 21% say they’d ride in one. Not surprising, considering there have been at least four deaths blamed on driverless vehicles. 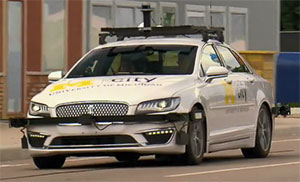 That’s why testing and research going on at m city is vital. As engineers, all over the world, continue to tweak technology.

Carrie Morton: The industry is moving in the same direction which is providing a fail safe path, whether it’s pulling the vehicle to the side of the road or putting the hazards on for example, but making sure that when the vehicle is in a situation that it can’t control, if there were no human to take it over, it moves into a fail safe position automatically.

When the vehicles communicate with each other and also with the traffic infrastructure they can act as a collaborative ecosystem and operate more efficiently, reducing emissions, fuel consumption as well as congestion.