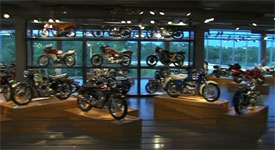 When you hear the term motorsports, most likely you think of auto racing like NASCAR and Formula One. But, motorsports also include motorcycles, with a racing history as deep as any four-wheel archive. And the best place to relive those glory days and discover treasures that can't be found anywhere else is down South. Get ready for motorcycle mania! It's the only way to describe a visit to the Barber Vintage Motorsports Museum in Alabama.

BRIAN SLARK, TECH. DIR.: It is absolutely breathtaking. You can read all the brochures and look at the websites, but there's no substitute for coming here.

This five-floor building boasts a massive collection of over 1,300 vintage and modern motorcycles. Each floor chronicles their evolution from the turn of the past century to today.

BRIAN SLARK: There's a lot of rare and limited production motorcycles where they only built three or four in the world.

Over 200 manufacturers are represented, including some of the most popular European and British brands.

BRIAN SLARK: There is a typical '50s and '60's Triumph motorcycle.

Rare finds include the Lilac CF-40 from Japan, a beautiful blue and red Britten from New Zealand, and the award-winning 1959 AJS E95 Porcupine. 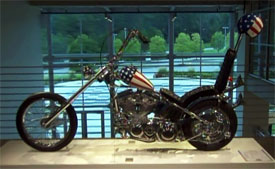 Some bikes conjure up movie memories, like the Easy Rider replica, while others hearken back to a forgotten era. Attendee David Gibbs marvels at how technologically-advanced these machines have become.

DAVID GIBBS: The most intriguing thing is to be able to visually trace the history of the machine from where it was initially nothing more than a metal frame with a tiny engine on it.

When the bikes are not on display, they are stored here in this 8,000 square foot storage room. So, Brian, this is an area that most visitors don't get a chance to see, but, boy, is it well worth the look.

BRIAN SLARK: Well, this is one of our storage areas, one of two.

Technical advisor Brian Slark helps catalog the museum's inventory and knows the details of every bike.

BRIAN SLARK: There are some very significant motorcycles in here, such as the Buell. They stopped production last year and that's the very last one.

A number of bikes are in need of desperate repair, like the 1917 Triumph from WWI. It will end up in the Barber Museum's in-house restoration shop. Here, staff work on two to three bikes at a time. Most of them hard-to-find jewels, like the 1957 Honda Benly and the 1911 U.S.-made Emblem. Restoring these pieces back to their former glory is painstaking work. 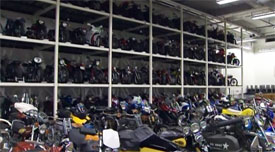 LEE CLARK, ASST. MGR.: That's one of our biggest challenges, is trying to make the bike back like it was either when it did something historical, like won a race, or when it left the factory.

The goal is to repair the bikes so they're fully operational. A philosophy that dates back to the origin of the museum and its creator George Barber. The Alabama native raced Porsches in the 1960's, then turned his attention to restoring motorcycles.

LEE CLARK: He liked the fact that he could enjoy the engineering on the bike when it was done. Still see the gear box, the -- you know, the engine and all the mechanicals. So that kind of just kindled that spirit. And he bought one, he bought two, before you know it, he had 300!

Barber wanted to preserve the history of these mechanized machines, and in the decades since, has amassed an impressive collection. Just ask this British motorcycle buff.

Why do you say that? 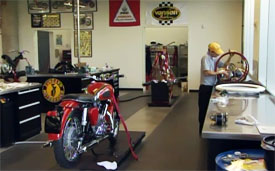 GEOFFREY CHAMPION: Because there's such an array of machines, and they're immaculately restored.

Separated from the sea of military bikes, "Indy Cars and Other Wheeled Wonders" is a special area dedicated to Lotus vehicles. Assistant manager Lee Clark is responsible for the 45 cars on display.

LEE CLARK: We want to present the total history of Lotus, so it is important to get the experience of going from the beginning to the end of a Lotus collection.

Like the motorcycles, they too are restored in the shop downstairs.

JOHN VIVIANI, RESTORATION TECHNICIAN: I had to fabricate new doors for this Lotus 17. And at this time, I'm making the inner door skins to reinforce outer door skin.

It's arduous work, but the folks at the Barber Museum are dedicated to bringing these automotive masterpieces to life. And it's certainly appreciated by those who flock to this motorcycle Mecca for a lingering look at these fully-restored snapshots in time.