We talk a lot about cars, suvs and trucks here on Motorweek, but buses are a big part of the history of transportation. Well, the largest and most telling collection of buses in the country can be found at a museum in Central Pennsylvania. Our FYI reporter Stephanie Hart was on board as these giant people movers took to the open roads to tell their stories. 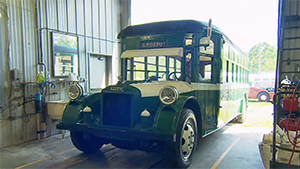 Stephanie Hart: I'm riding around in this 1954 scenic cruiser. We took this bus and others out of the AACA Museum for the day to celebrate them. These buses don’t hit the road often and when they do they’re noisey and harder to drive than buses today. Fageol Motors became the first company to build a bus from the ground up in 1921.  This ‘24 Fageol is one of only five left in the country. The AACA museum, in Hershey, Pennsylvania, has two on display.

John Oakman: It was basically a commuter bus in California. It would go from Santa Monica to maybe LA.

Stephanie Hart: One hundred years later people are still attracted to these buses and intrigued by their history.

Wendy Martin: I am a big fan of the vintage buses. Just really exciting to see and learn the history of the buses.

Stephanie Hart: And preserving that history is what AACA is committed to doing.

John Oakman: One of the buses needed a carburetor rebuilt, the kids that were helping us, they all looked and said “what’s a carburetor” and then some of the guys who are older said “well i’ve never rebuilt a carburetor” so I showed them how to rebuild a carburetor yesterday, get it back on the bus and get it running. As electric cars become the thing everyone wants there’s no longer going to be combustion engines in some vehicles including buses so we’re trying to preserve that. 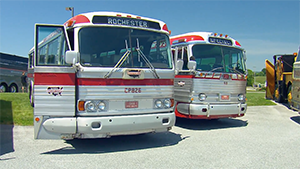 Stephanie Hart: Preserving that-by celebrating that-once a year during the Museum of Bus Transportation’s Spring Fling. Some people traveled as far as California here to Hershey, PA to check out all these unique buses.

Gary Hatt owns this 40 foot bus that he converted into a motorhome.

Gary Hatt: It’s outstanding. I met a lot of people I have been chatting with on Facebook and talking to on the phone for a long time so now I get to meet them in-person and see the buses so it’s worked out great.

Stephanie Hart: These buses from the 50’s and 60’s were extremely popular. People remember riding these buses back and forth to work or to go on vacation.

John Oakman: The public who rode on buses between cities would have rode on the 4104 and the 4106 and the scenic cruiser they are predominate GM and they controlled the market and yeah everyone recognizes them.

Stephanie Hart: People also recognize this one! This was the backup bus used in the 1994 movie Speed starring Keanu Reeves and Sandra Bullock. 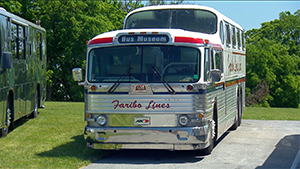 John Oakman: It was backup bus but they would have to rip the floors up of the vehicles and have them staged there so if something happened to the primary bus they could continue to shoot because the shooting was without a floor because that’s where the bombs were. So we don’t know where that bus stood in the sequence and we don’t know if it was used or not but it was there.

Rafiq Nelson: I am a motorcoach operator. I've been driving buses for 27 years. Started working over at Greyhound driving the MT-9 with stick shift. Had a love and appreciation for buses ever since I was a little kid. My great grandfather was a bus driver so when I got off of school I played hooky, I would always get on his bus and ride around. My grandfather never said anything but I found out that I fell in love with the engines, the way the suspension was. I became a bus nut.

Stephanie Hart: And he made us one too.