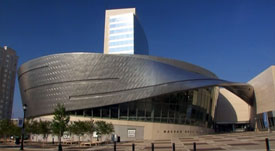 Since the 1920's, backyard mechanics have been souping up Detroit iron to see just how fast they could run. But, it was the 1947 founding of NASCAR that brought stock car racing out of the backwoods and into the super speedway. And like any super sport, it deserves a place to honor its own. That's where FYI reporter Yolanda Vazquez crossed the finish line.

Charlotte, North Carolina, home to NASCAR's most winning teams and drivers, and now the perfect setting for motorsports newest treasure, the NASCAR Hall of Fame. At this sprawling 150,000 square foot facility, visitors can learn about the history and heritage of stockcar racing. From its humble beginnings in the '30s and '40s, to its current-day status as one of America's most popular professional sports.

JEREMY MIDDLETON: I think the reason why NASCAR is so successful is because they're loyal to the fans, they make it more fan friendly.

And now fans can experience the excitement of this high-octane sport at a family-friendly venue filled with more than 50 interactive displays.

WINSTON KELLEY: This particular exhibit can scan a part and it can tell you what the part is, but also what that part does on a race car.

Executive Director Winston Kelley takes me on a tour of race week, a behind-the-scenes look at what teams do to prep for a race. Highlights include a recreated car shop and a full-size transporter.

WINSTON KELLEY: It's our shop on wheels, it's the locker room, it's a multifaceted facility…so you can actually go in there and see what it's like.

Another popular area is the pit crew challenge. Visitors try their hand at servicing a race car in under 30 seconds. Most agree it's a lot harder than it looks on TV

TIM MIDDLETON: You know, I've watched those guys week after week after week saying, "Oh, I can probably do that," but it ain't quite so easy to lift that gas can and run that jack. So, you know, you kind of get an idea of what they go through.

A video from top NASCAR drivers prep participants for the race simulator. The ride is as realistic as it gets...

JENNIFER DAVIS: I don't know, it gives you the real experience…the feeling, the sound, that tight enclosed car experience. I loved it! 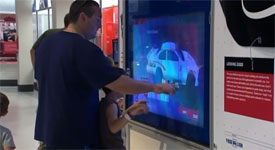 Heritage Speedway covers NASCAR's 60-plus year history with more than a thousand artifacts, including the first rulebook from 1948, and racecar legend "Fireball" Roberts' memorable red jacket. Those who helped organize the sport like Bill France, Sr. are profiled along with pioneers they've lost along the way. Honoring our legacy pays tribute to their accomplishments. And nowhere is this more evident than at the Hall of Honor. First-time inductees include the founder of NASCAR, Bill France, Sr., his son Bill France, Jr., racing legend Richard Petty, early NASCAR superstar Junior Johnson, and one of the more contemporary icons of the sport, Dale Earnhardt, better known as the "Intimidator."

TRAVIS KVAPIL: There's so many people that obviously are going to be inducted into the Hall of Fame in years to come, so many personalities, so many characters.

Sprint Cup driver Travis Kvapil marvels at how realistic the exhibits are at showing the true side of racing.

TRAVIS KVAPIL: It really gives you an inside look at what us competitors go through each and every weekend.

The popular driver, who won a NASCAR Truck Series championship in 2003, says the museum does a great job at chronicling the history of the sport.

TRAVIS KVAPIL: What's so cool about it is you get to walk through here and you get to see where the sport has come from, really from day one, just a thought, just a vision.

A vision beyond what anyone expected with a hall of fame that gives NASCAR the big league recognition it earns every race day.

TRAVIS KVAPIL: There's so much to do. It's just an amazing place.