Very few nameplates are around for over half a century, but the Ford Mustang is one of them. 57 years ago, the production Mustang made its debut at the 1964 New York World’s Fair. Every year, to celebrate mustang’s birthday, fans get together in April for National Mustang Day. Our Stephanie Hart was invited to this year’s party to experience first-hand what keeps the original pony car running strong. 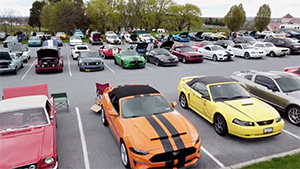 Stephanie Hart: I’m at AACA Museum in Hershey, Pennsylvania for National Mustang Day. There are about 250 Mustangs here representing every generation. Parked side by side in solidarity, making quite a statement, on its birthday!

Chuck Sennett’s first car was a 1968 Mustang and like so many other people here today, he’s remained fiercely loyal to the brand ever since. Today he owns this 2013 Shelby GT 500 convertible.

When you drive this car what sort of feeling do you get?

Stephanie Hart: I thought you were going to say that. I did.

Chuck Sennett: You feel like a young guy again.

Stephanie Hart: That feeling you get when you drive a Mustang essentially has remained the same for 57 years.

When the Mustang was first introduced it was Mustang mania. Ford says hundreds of college students stormed an Indiana dealership to see the car. They actually had to close down the dealership because the crowds were out of control.

Ted Ryan: Someone actually slept in their new Mustang in Dallas, Texas because they paid cash for it and wanted to sleep in it to make sure the dealership didn’t sell it to anyone else until the check cleared. 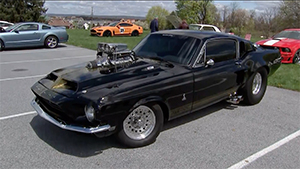 Stephanie Hart: More than 450,000 Mustangs were sold its first year, including this one.

Jeffrey E. Bliemeister: It has a six cylinder engine and a four speed transmission which is an uncommon combination. Most 4 speeds were v8 cars and high performance cars. It also has a rally pack which is an optional feature that goes across the steering column. It has a tachometer and a clock on it which kind of gives it a sporty feel.

Stephanie Hart: Impressive performance, back then and today, fuels its popularity. In 2015 National Mustang Day was born. It’s an opportunity for the Mustang world to come together, on April 17th, and drive their mustangs to show their love for the brand.

It seemed like everyone wanted a photo or video of this custom 1968 Mustang GT 500 with a supercharged Boss 429 V8. You probably won’t see a car like this anywhere else.

What’s your favorite part about this car? 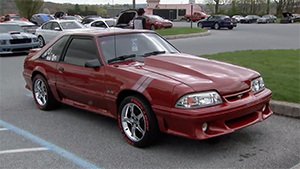 Paul Carlevale: It has a turbo 400 transmission in it and a Ford rear. It’s a lot of fun, I enjoy it a lot.

So many amazing mustangs! This one is a 1992 GT… built on the fox body unitized chassis… hence the play on words.

Sam Armstrong: It’s not restored; that’s just original with a little freshening up.

Sam Armstrong: It’s like driving a new car. I love it. I like driving that too, but since we put the foxy lady on the tires people kind of look at me funny.

Stephanie Hart: Mustang memories, past and present, happy and sad, and everything in between, are all along for the ride! And wow has it been an adventure!