It’s been 20 years since the opening of the National Corvette Museum– the holy land for America’s premiere sports car. And while it’s been in the news recently for something other than its prized collection, our FYI reporter Yolanda Vazquez has found that it doesn’t have anyone in Bowling Green down in a hole.

YOLANDA VAZQUEZ: It’s the sinkhole seen around the world- and one that made the National Corvette Museum an internet sensation.

WENDELL STRODE: “It was, uh, kind of a real incident for us. It swallowed eight classic corvettes.”

YOLANDA VAZQUEZ: More than 9 months later the 45-foot wide hole-located in the museum’s skydome-is still there-- along with a handful of mangled cars.

JASON KIRSCH: “I had heard about it on the news. But just to see it, and see everything around you, you know, the destruction of the cars, unfortunately. It’s sad…amazing, but sad.”

CHAD PLATT: “Last time I remember the cars, of course they were all on display. You could walk around and see them. Of course, now they’re all destroyed. And yeah, it’s kind of disappointing. 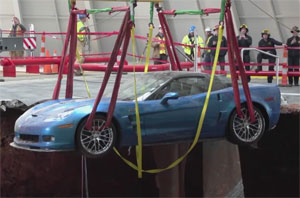 YOLANDA VAZQUEZ: Retrieving the vehicles was a painstaking process. Some like this 2009 ZR1 prototype known as the Blue Devil started right up… others suffered a more devastating fate. The museum, with help from General Motors, will restore three of the eight damaged cars and fill the gaping hole. The others will be part of a permanent exhibit.

WENDELL STRODE: “We have faced adversity before, and we’ve always been able to overcome. And we didn’t know how it was going to work out…

YOLANDA VAZQUEZ:  Executive Director Wendell Strode says the sinkhole has been a blessing in disguise. The museum has seen a 60 percent increase in attendance over last year.

JEFF HILL: “Everybody’s heard about the Corvette Museum…yeah…so it was on our bucket list. This and the Bourbon Trail.”

CONDA SLICK: “I really love it. It’s very informative—more than other museums I’ve been to…”

YOLANDA VAZQUEZ:  And there’s a lot to see and do for both kids and adults. The museum, located near the corvette assembly plant, captures the complete culture of America’s most beloved sports car. 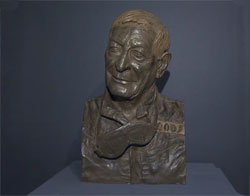 MANDY KIRSCH: “I learned a lot-from the build to the ownership of it. You know, the people come together and celebrate the car. It’s pretty cool.”

YOLANDA VAZQUEZ: The Corvette debuted in 1953 at the New York Motorama show. It was named after a British Navy class of fast pursuit ships.

Visitors will also learn about Zora Arkus-Duntov- better known as the godfather of Corvette. His ashes are entombed at the museum along with his fully loaded, 1974 Corvette Stingray.

WENDELL STRODE: Zora told them, “If you want a sports car, it’s got to have some horsepower. Of course they hired him to be the first Corvette Chief Engineer….

YOLANDA VAZQUEZ: Strode says the museum pays tribute to the Vette’s 60 year history from the first one built in 1953 to their continued success in auto racing.

“Did you know that instead of going to a dealership, you can pick up your brand new Corvette at the museum? For an additional fee, they’ll do a pre-delivery inspection, detail your car… and then bring it out to Corvette Blvd for everyone to see.”

Veryl and Sue Crutcher are the new owners of a 2015 velocity yellow Corvette Convertible. They drove from Illinois to pick it up.

SUE CRUTCHER: “This is the first Corvette we’ve ever owned. So it’s an experience for all of us.”

YOLANDA VAZQUEZ: And if you’re not able to drive off in your dream car, maybe you can attend one of their high performance driver’s training courses at the new NCM Motorsports Park. 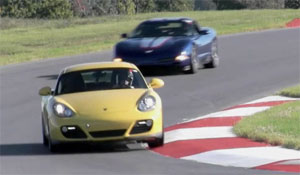 MITCH WRIGHT: “We’ve already proven to be a really nice economic driver for the area…”

MITCH WRIGHT: “…well it’s not only Corvette clubs. You know, we had Bluegrass BMW club…was our first paid client. So it’s not Corvette exclusive by any means. We’re open to all makes, models, marques, it really doesn’t matter.”

YOLANDA VAZQUEZ: So the next time you’re in Bowling Green, Kentucky, make a pit stop at the National Corvette Museum. You’ll learn a lot, see history in the making and leave, like me, riding in style!