JOHN DAVIS: While we’ve certainly been to a lot of exciting places during four decades on the air, it’s really the stories we’ve found along the way that have made the journey truly enjoyable. So here's a look back at our favorite memories. 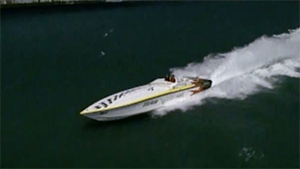 STEPHANIE HART: These are just a few of the thousands of tapes in the MotorWeek archive. All the great great stories are kept right here. I tracked down some of our former reporters to find out about their favorites first hand.

JOYCE BRAGA: Chevrolet’s El Camino is in for some competition. The Ford Motor Company and National Coach products are entering exclusive half car half truck market with a vehicle of their own. The Durango.

CHARLOTTE NICHOLS: So we decided to take a look at what really happens when you drink, and then drive. With the help of Maryland State Police officers, James Williams and Michael Criandires and MotorWeek staff members Beth Nardone and Martin Peters, we conducted a drunk driving test on a course at Martin State Airport outside of Baltimore.

LISA BARROW: I know it’s a show about cars, but the Hustler 50 Base Boat had 3 Lamborghini engines and it was a total of almost 2,000 horsepower. I had to go drive it! I just had to. The thing that really amazed me was 0-100 was I think 15 seconds. But what I still remember to this day, I can almost feel it, is the way it  affected my skin it felt like my skin was going to blow off! That was a wild ride! i don’t know if I would do that one again.

JENNIFER KHASNABIS: Actually, probably one of my favorites was when we did Maryland School for the Blind. That was a great and I have to tell to tell you when I left that day after shooting that, I remember just having this,  tear in my eye because these kids were amazing. And I had, it was one of my favorite shoots just because they.. the kids were so enthusiastic, and Porsche was really so devoted to making this a wonderful day for the kids, and they did an amazing job with reading the directions in braille. Just the whole concept was just wonderful. 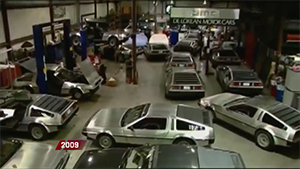 STEVEN CHUPNIK: I think as a child growing up in the 80’s one of my favorite stories is the History of the Delorean and the Return of the Delorean. Back to the Future is one of those movies that is just iconic and the Delorean was just one of those stories that I had to go down to Texas where they’re rebuilding the cars using all the old parts.

HENRY KOPACZ: You’ve always wanted to be a racer but you never had the chance. Well lucky enough for me and a select group of others, someone will help our dreams come true. In  order to experience the competition in its rawest form, MotorWeek Associate Producer Brian Robinson and I suited up and mixed it up with the other competitors at the race finals in Phoenix, Arizona.

YOLANDA VAZQUEZ: Somehow or another I came across this rocket ship car article and I thought to myself wow that’s a great idea, but it’s an even better FYI. It was such a unique story that these two brothers decided to preserve a piece of history. They had experienced time at that amusement park along with so many other people in the area and decided that let’s just keep a little sliver of that. And not only keep it, let's retrofit it and turn it into an experience. I thought the fact that they were able to even do it was amazing. 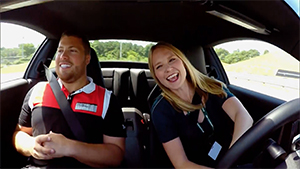 LAUREN MORRISON: Now that I’m living that minivan mom life, some of my favorite MotorWeek memories include A Need for Speed. Like the time I got to test out the track at the Porsche Experience Center in Atlanta.

ZACH MASKELL:  Being a MW reporter allowed me to do things I never thought I would be doing. I was constantly checking off items on my own bucket list. There was always speed and always adrenaline. One of the most fun times was hanging out up and coming Formula star Cameron Das where he let me drive his open wheeled F3 car around Summit Point in West Virginia.

STEPHANIE HART:  My favorite MotorWeek memory was visiting the Hot Wheels Headquarters in California. We got to see how Hot Wheels are created from start to finish. We also got to play with their giant test track and ride around in some Hot Wheels commemorative vehicles. I was definitely living my best childhood dream.