The sport of overlanding is quickly gaining traction here in the United States. It’s essentially half camping and half off-roading done in remote destinations. Never one to turn down a challenge, our Stephanie Hart headed to the wilds of Oregon with specialty vehicle maker EarthCruiser to give us a glimpse into this adventurous new lifestyle.

The end: somewhere near the base of Mount Bachelor.

Lance Gillis is our expert navigator and the founder of EarthCruiser. 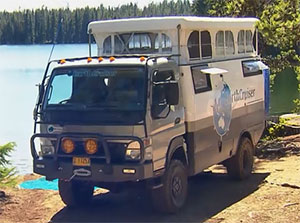 Stephanie Hart: Like this dirt trail which was very rough and rocky at times. And as we headed deeper into the forest the trail became more snow packed.

EarthCruiser could handle all of it.

The specialty vehicle maker was founded in 2008 in Australia. It moved to the United States in 2013 - at a time when the lines between off-roading and camping were beginning to blur.

Brent Baker: Traditionally camping has always been go to the national parks you know see the wildlife and everything and as its gotten more popular over the years and more people have gotten into it camp sites have gotten more developed and they’ve been a lot more accessible which is great to people so everyone can see them, but what it has taken away is its remoteness of getting out in the wilderness. The wildlife has moved on and things have kind of migrated and now you can’t go to a campsite and get the same experience that you could back in the day.

Stephanie Hart: Perhaps why overlanding has grown rapidly in recent years…to keep up with the demand. 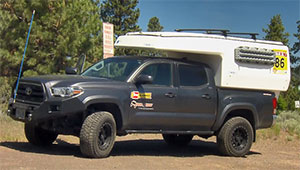 EarthCruiser makes a variety of vehicles.

Lance Gillis: We have what we call a “mod” that goes on the back of a pickup truck. It starts pretty simple, but again it gives you what you need, but not too much.

Stephanie Hart: Then there’s the “exd”. Typically setting up camp requires a lot of muscle, but with EarthCruiser all you have to do is this…

Stephanie Hart: The price tag? 185-thousand dollars. For about 100-grand more you can have the exp which is bigger and built on a different platform.

Lance Gillis: So with our exp, which was our original, we chose a cab over platform - incomplete vehicle - so we could start from the ground up building it perfectly what we wanted. 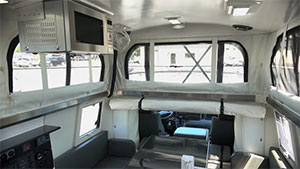 Stephanie Hart: inside, there’s virtually everything you need - a working faucet and right over here a refrigerator that’s stocked with all the good stuff…not to mention there’s a complete bathroom. With the push of a button a toilet moves out from the wall and there’s even a shower.

Traveling to this remote spot we worked up an appetite. We got the campfire going, put some steaks on the grill - along with healthy sides - And Michelle shared her stories of overlanding.

Michelle Boltz: As we get older things aren’t as easy and I want an inside shower and I want an inside toilet if the weather is crappy I want to be inside and I don’t want to be living on top of someone else I want to have some space so an EarthCruiser meets all of those needs and it’s completely competent and capable off road so I never feel scared that we are going to get stuck and we’re going to be there forever and it’s comfortable when we get to where we want to be 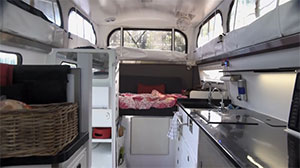 Stephanie Hart: And this is where we want to be. By Orange Lake… outside of Bend, Oregon.

As day turned into night… we soaked up the beauty of nature. And the tranquility got the best of us…some of us nodded off pretty early.

Brent Baker: Getting out here and camping under the stars and just not being by someone who’s got a generator running and everything else – the peace, the quiet, we all put in hard work weeks and being able to get away from it all and disconnect and connect with the people you camp with and nature it is by far the biggest stress reliefs and recharges that you can have.