We’ve seen a lot of evolution, and even a couple of revolutions in the automobile over 36 seasons of MotorWeek. And, while we think progress is essential, and most “new ways” have been welcomed, to be frank, some of them have left us scratching our heads and saying…”what were they thinking of?” So we had our FYI reporter Lauren Morrison look into the things that really grind our gears about new cars today!

A trip to the track, where windows must be down, and sunroofs closed, unveiled a very annoying wind throb. 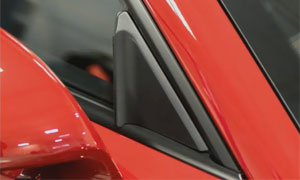 CHARLES BROWNSTEIN: “It turns out that it’s so well streamlined that it has a funny condition of air entering the car at high speeds and exiting at a high frequency, making kind of a high pressure build.”

LAUREN MORRISION: There are quick fix devices all over the internet to solve the problem, but they don’t come cheap, so Charles got to thinking.

“So I took a cue from all the other devices that Porsche has strewn around this car and I thought I’d make a little air foil and that’s what I came up with.”

LAUREN MORRISION: A removable air foil device that’s just big enough to disrupt airflow into the cabin…made from something that’s probably in your refrigerator.

“I just happened to have finished drinking some juice. Turns out, it’s a nice stiff plastic and a good surface.”

LAUREN MORRISION: While Charles may have solved his problem, it got us thinking….there sure are quite a few things about cars these days that drive us crazy.

First up, an overload of safety features. From blind spot warnings and lane change assist … 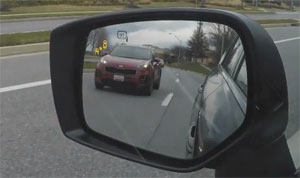 LAUREN MORRISION: “Listen, I am all about safety, but this lane change assist is really more of an annoyance at some point.”

LAUREN MORRISION: “Again, I’m all for safety, but have they never driven in heavy rush hour traffic? There is always someone behind you, and half the time, they’re not even in your blind spot.”

We just like to drive our cars ourselves!  Next up…Stop-start systems.

LAUREN MORRISION: “Some do it better than others, but I am still not a fan of the stop start. Coming to a shuttering halt at a stop sign just doesn’t feel right”

LAUREN MORRISION: But the thing that really gets up under our hood and drives our staff crazy..touchscreens. And most of you said the same on our facebook page.  Now, we could go on and on about some of our not so favorite things…. 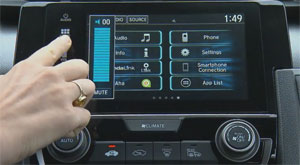 LAUREN MORRISION: Uugh! touch screens. Whether it’s a system that lags or doesn’t respond when my hands are cold I’m tired of having to toggle through a million screens just to tune my radio. Just give me buttons or knobs. Now we could go on and on about our not so favorite things.

ZACH MASKELL: “All the plastic coverings inside the engine bays now. I went to find a positive battery terminal the other day. It took me way longer than it should have.

BRIAN ROBINSON: “Also not a fan of electronic shifters, especially the push button variety. They take a long time to shift back and forth and sometimes you're not sure what gear you're actually in.”

GREG CARLOS: “Well, one of the things I hate about new cars is that when I get out of the car and the doors are locked, I get out and I go to the back seat, I can’t get in because all the other doors are locked except for that first door. When I get out of my car, I want all of my doors to be unlocked so I can access them without having to unlock the door again. Drives me crazy!” 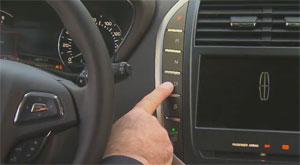 LAUREN MORRISION: I know we can usually fiddle with reprograming a car’s behavior, but that’s another nuisance!

Still, even with our pet peeves, today’s cars have a lot going for them, and hopefully the most annoying trends that have come along…will soon go.