We talk a lot about the “California Car Culture”. From hot rods to EV’s, it’s the state where America’s motorize trends usually get their start. And, thanks to publishing magnet Robert E. “Pete” Petersen, they are preserved forever. We were there for the opening of the Peterson automotive museum some 20 years ago. So, it’s high time we went back! Our FYI reporter Stephanie Hart takes the lead. 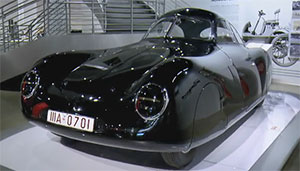 STEPHANIE HART: “I’m in Los Angeles California inside the famous Petersen Museum. I’m going to show you around three exhibits - each eye-catching - each with a rich history. We are going to start here with the Porsche effect.”

MICHAEL BODELL: “This one was created for the Rome to Paris race and it’s a race that never happened but they still manufactured the cars and a lot of the inspiration for the Porsche 356 came from this car and inspired by this design.”

“So right now we are in the competition section of the exhibit and it shows the vast racing history of Porsche and its competing nature. Brands used to have to win races in order to sell cars on the lot and Porsche did that extremely well.” 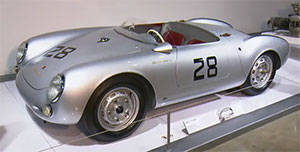 MICHAEL BODELL: “This is what really started it all a 550 Spyder … the 550 was where Porsche built their first purposeful race car and this car is known for having the celebrity driver James Dean. Porsche wasn’t as big of a brand as it is today until it actually had the influence of Hollywood. Kind of the rebels of Hollywood made Porsche a really big deal Steve McQueen James Dean drove Porsches and people latched onto that especially abroad where the cars were manufactured. Germans wanted to see celebrities in their cars and the celebrities drove their cars and made the brand really tremendous.”

It’s lights, camera, action! Some of my favorites are the Batmobile. Driven by Michael Keaton in “Batman” and “Batman Returns.” And “Great Scott!!” The DeLorean from “Back to the Future.” 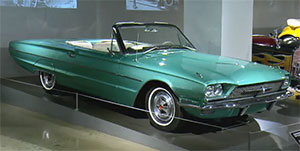 “Do you recognize this car? It’s from the hit movie Thelma and Louise. It may look camera ready on the outside, but take a look at the inside… it’s clearly well worn that because Hollywood is notoriously rough on cars as long as it looks good in the shot maintenance is an afterthought.”

“So why do people love to see cars from their favorite movies here in person?

LESLIE KENDALL: “Maybe you have seen every back to the future movie and you have been longing to look at the DeLorean and you come here and you see it and get your picture taken with it and that’s pretty cool! Something to tell the kids and the grandkids. It is an experience you can’t have anywhere else.”

In 2015, the Petersen Museum went through a total transformation. It cost 90 million dollars. Interior spaces were re-designed to make room for changing exhibits… like seeing red: 70 years of Ferrari.

STEPHANIE HART: The best of the best Ferrari’s  are all here.

LESLIE KENDALL: “The 250 GTO is the most valuable car and one of the most important Ferrari’s because it embodies everything that people value in a Ferrari it looks great it handles great performs beautifully.”

STEPHANIE HART: Being around so many incredible cars puts you in the mood to drive. Even though you can’t take cars like this one out for a spin, being so close gives you that sense of freedom and adventure.