While we certainly had fun pushing the 911 Turbo to the limit at Summit Point Motorsports Park, Porsche has actually built their very own track that’s designed to really highlight the capabilities of their sports cars. So we sent our FYI Reporter Lauren Morrison down to the Porsche Experience Center in Atlanta for a little personal time behind the wheel.

LAUREN MORRISON: "The Experience Center is right next to the Atlanta airport, and the only thing louder than the planes, are the Porsches on the course."

"I like to think of it as Porsche’s playground"

With this 1-point-6 mile driver development track as my playground…I was ready for recess.

"We’ve really purpose built a track that will allow you to get the most out of the Porsche vehicle and learn something about yourself." 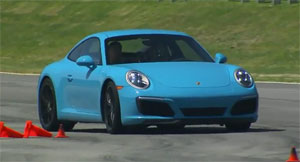 Depending on the model, prices start at 300 bucks to get behind the wheel.

“We have everything from our Boxster, our Cayman, our 911, Panamara, Cayenne, and really some bespoke, unique cars that are hard to find, like the GT3 RS.”

Back to the track, which features 6 different drive modules, each designed to showcase what a Porsche is capable of.

“So whenever you’re ready, foot on the brake, floor the gas….off the brake straight ahead… it’s amazing how quick we stop” 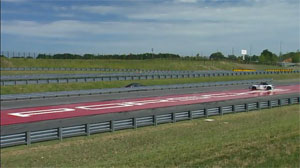 The first thing I noticed on the track…a bright red Porsche logo…which marks the kick plate.

“This is the part of the day I’ve been most anxious about.”

This is the only course in North America that offers a kick plate, which does exactly what you’re thinking…kicks the car’s rear end out from under you and sends you into a spin. My goal? To correct that spin and point the car back straight.

“If you delay that reaction, it’s harder and harder to catch the car."

After a few humbling kick plate go-arounds, I set my sights on the low-friction circle. 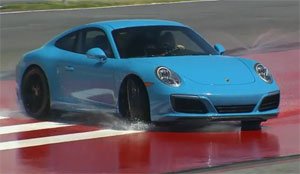 Kevin Clifford: “We’re going to try and drift, slide the car around. This being a rear engine car, we have a lot of traction, a lot of weight over the rear wheels. We can use that to our advantage. We can slide the car with the back end out the entire circle.”

I also had a goal of my own for this module…

“One of my co-workers, Zach Maskell is super into drifting, so I gotta learn from skills to show him up!”

“Alright, so blip the throttle, turn to the left, slide to the right, correct it…woooo!”

So Zach may have me on the drifting for now, but I showed skills on the low-friction handling circuit. 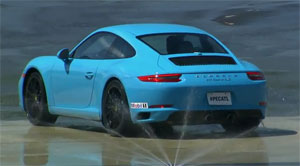 “So the way this works, we’re going to accelerate into the corner, you’ll jump on the throttle real quick to break the rear wheels loose, get the car sliding, we’ll catch it, go into the next turn and do it over and over and over again.”

“So it’s a bunch of mini slides that all add up to make one big drift all the way around the track.”

“Back on the throttle, and now off, and then back on the gas, and then off again…*laughing*”

After almost 90 minutes in the car, I was feeling pretty confident as I sped around the handling circuit.

“You’re getting the hang of it. Yeah! I’m feeling like a race car driver!” 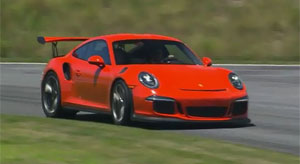 But Kevin, my patient instructor, gave me a reality check when he got behind the wheel and took me for a spin in the GT3 RS.

At the end of the day, I walked away a much better driver…and with a much bigger smile on my face…checking both boxes on the Porsche experience center’s mission.