Depending on who you talk to, it’s been between 50 and 60 years since the hey-day of american-made cars. I’m talking about mostly V8 powered hunks of mid-century Detroit iron here. We’ll remarkably, many of the best examples are alive and well. But, it’s not easy keeping such icons in tip top shape. Our Stephanie Hart has a look at how one classic collection works its magic.

Stephanie Hart: This is a 1959 Ford Country sedan. You just don’t see cars like this anymore. Back in the day, people would just drive them into the ground and get rid of them so to see one here in this condition, fully restored, is just incredible.

It’s one of hundreds of cars, of all types, restored and on display at the american muscle car museum in Melbourne, Florida. 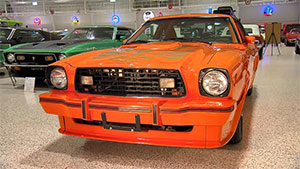 The museum is open exclusively for charity events… so getting a glimpse of gems like this one, is a privilege.

Mark Pieloch: They only made 4,318 king cobras ever and it’s a very rare car to see especially in this color combination and being all original.

Stephanie Hart: These cars live a pretty pampered life here in the museum, but they still need t-l-c .That’s where the restoration technicians come in. It’s their job to make sure the automobiles are always in running and driving condition.

There are 320 cars here, but a very small staff.

Ed Dedick: We have a very small but efficient staff. We currently have a nine page checklist which is broken down into four sections. We have prestart, performance for driving, post check, then we have a detail so we can keep a log on each car.

Stephanie Hart: Once the cars receive their annual maintenance they’re taken outside here and driven around to make sure they run properly… and this is the fun part. 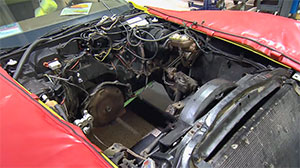 Restoration 101 has stayed the same for about three decades, but the implementation of the job has changed.

Ed Dedick: We have a 1967 Camaro pace car it’s still continuous learning on how we take care of it. It may still be the base motor and the carburetor in it, but still how can we evolve, how can we get better at it. We talk to other museums, we talk to other techs and we even try to incorporate the high school mechanic programs.

Stephanie Hart: This is a really nice car. 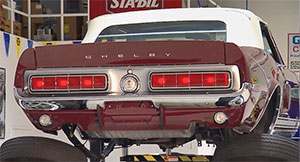 Todd McCarty: It is. A 1968 ford Shelby GT 500 Mustang Convertible. It was actually 1 of 3, but it was more along the lines of 1 of 1 because there were 3 cars made in this color in 1986 – 2 coupes, 1 convertible. The convertible was made specifically for Carol Shelby’s wife. She wanted a convertible so he made her a convertible.

Mark Pieloch: Ford built 10 production prototypes before they actually went to normal production. This is the last of the 10 production prototypes and it’s the only one to survive. It has 27 features – combinations of the gt 350 r and the gt 350 s. S would be the street version. R would be the racing version specifications. As you can see it has the racing specification front apron area. This car has been shopwn nationally in 2007 it was a Shelby American Concours Gold. Very unique car, very unique history. Just a really stunning rare vehicle. 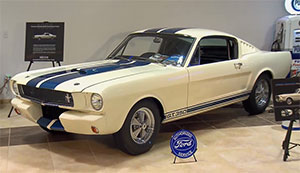 Stephanie Hart: What do you like most about your job?

Ed Dedick: There’s a lot of things, but one of the small parts is being able to preserve a part of history for future generations.

Stephanie Hart: And isn’t that what it’s all about… ? Commemorating the past while keeping it alive to inspire the future.