Nothing quite compares to the look of muscle cars from the 60’s and 70’s…but as much as the styling turned heads, today’s muscle offers more power, better drivability, and increased safety measures. But what if you could have both old and new? Our FYI reporter Lauren Morrison checks out Revology Cars in Orlando, Florida, where their Mustang reproductions are the near perfect blend. 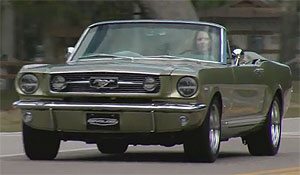 LAUREN MORRISION: It’s got the classic character of American muscle…but this reproduction 1966 Ford Mustang GT convertible is living in the 21st century!

TOM SCARPELLO: “So we’re taking that dream and kind of updating it and bringing it into this century. So you get all the great style and character and everything that made those cars special, but with a modern set of functionality.”

A Revology Mustang is a brand new car…built from the ground up. Side by side, most folks would be hard pressed to pick out the Revology Cars’ reproduction versus the original…but behind the wheel, I certainly could tell the difference…starting with performance.

TOM SCARPELLO: “They’re modern, state of the art…These are the same engines that are installed in current model Mustang GTs and Camaros.”

It’s behind the wheel though, where differences quickly develop.

LAUREN MORRISION: “For comparisons sake, right now I’m in an original 1966 Ford Mustang GT, and the ride is completely different.”

From stiff steering that I’m pretty sure classifies as a workout…to brakes that don’t exactly stop on a dime…the original just isn’t as much fun to drive.

TOM SCARPELLO: “They just don’t have the drivability, the reliability, or the safety, or certainly not the performance, of modern cars.” 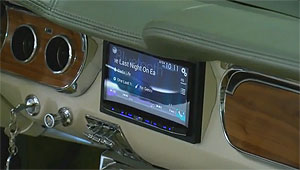 LAUREN MORRISION: The driveability of this Revology 1966 Ford Mustang GT is completely different. From the steering to the braking, everything is nice and smooth. I feel like I could drive this all the way to California.

LAUREN MORRISION: Modern luxuries that we now just can’t seem to live without, like keyless entry….and touchscreens… also come into play in this Revology revolution.

“To lights that are 10 times brighter than the original incandescent bulbs.” 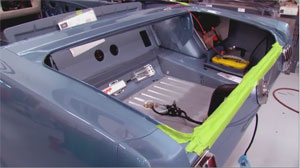 TOM SCARPELLO: “We have a 16-gauge steel trunk floor, where there was none before. And that helps to separate the fuel tank from the passenger compartment in the event of a rear end collision.

So much has happened in the area of safety, and we’ve tried to incorporate as many of those things that we can, you know obviously without impacting the essential design and character of the car which is really the reason people buy them.”

LAUREN MORRISION: The company currently builds 3 Mustang models at their Orlando headquarters, but customers call from all over the world, looking for a recreation of the ride they remember.

LAUREN MORRISION: With prices starting at 160 thousand dollars…and going upwards of 200 thousand, my question going in was, why not buy an original? But the Revology ride answered that for me.

TOM SCARPELLO: Why would you buy the original when you can buy this for the same amount of money?’ Because this does everything that did, times a hundred. It’s so much better to drive. It’s reliable, it’s safe, it’s comfortable.”

LAUREN MORRISION: OK, we know that the character of the original will never be beat, but a Revology Mustang lets us look like the past, while driving in the present …and beyond.