If you want to see just how far the automobile has come, you only need to visit the Revs Institute for Automotive Research in Naples Florida. This one-of-a-kind museum boasts some of the most important and rarest cars ever built, so we asked our FYI Reporter Lauren Morrison went to check it out for all of us.

LAUREN MORRISON: When you think Florida, you think palm trees, you think beaches, but if you’re in Naples, and you love cars, the place to be is The Revs Institute.”

LEE MCCASKEY: “I have never encountered a person that walked out that was bored. It’s just amazing what’s here.”

LM: With 40 thousand square feet of gallery space…the revs institute houses about 115 cars spanning the last century…with an amazing tale behind each one.

LEE MCCASKEY: “There are 115 anecdotes and stories with each of the 115 cars we have.” 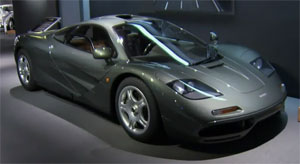 LM: The oldest in the collection? An 1896 Panhard & Levassor Wagonette, which is in stark contrast to the youngest…a 1995 McLaren F1.

SCOTT GEORGE: “And it really begins to give someone the ideas of really the evolution of the automobile and how it has transformed our lives and how its’ evolved through time as well.”

SCOTT GEORGE: “And so the culmination of those 2 collections are here, with primarily Mr. Collier’s involvement since 1986.”

LM: Cars are split into 4 categories…automobility, or the cars of the roadway, vitesse, which deals with the raceway, porsche, which is all about the automaker, and revs, an area that highlights the evolution of auto sport.

“These aren’t just cars randomly placed into a room, there’s a strategy behind it. It’s a way of storytelling. Just take a look at this row of Porsches. It’s like a timeline in history.” 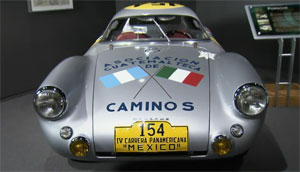 This timeline starts here, with the very first Porsche 550 coupe.

LEE MCCASKEY: “This is the very first purpose built Porsche in existence and believe me, Porsche would love to have it back home in their museum.”

The car holds not only historical significance, but is part of the collier family history.

If riding in style is more your taste, check out this doozy of a Duesenberg.

LEE MCCASKEY: “This is a beautiful car, right out the Great Gatsby if you want to put it that way.”

LM: This is the ‘super short’ version of the 1935 SSJ Duesenberg…only 2 were made. Actor Gary Cooper owned this one… 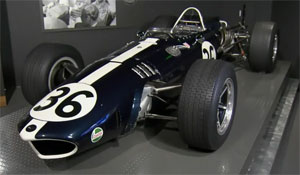 But the car that seems to get the most “oooohhhsss” and “ahhhss” is this one…the Gurney Eagle F1.

PETER NOBLE: “This is my favorite car and its’ got to be the most iconic American car that there is…”

JOHN MEYERS: “Well, I knew the Eagle was here, and of course, that made the whole trip worthwhile to me.”

LM: “The thing that really stands out about all these cars is just how close you can get to them. There’s no barrier between you and the vehicle. While you can’t touch, you can peer inside and get and inside look at all the intricate details.”

SCOTT GEORGE: “By allowing the cars to be seen without barriers, it brings a new dimension that they typically don’t get a chance to see.”

LM: Most of these cars have a few miles under their belts, but nearly everyone in the collection is in running order…and ready for a ride.

SCOTT GEORGE: “It’s very important that we are able to bring these cars to life from time to time to let people hear them, see them, smell them, and see them go.” 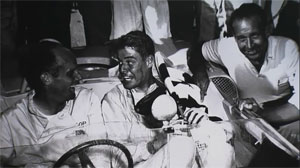 LM: The institute also offers a research library for scholars to study anything automotive.

The revs institute also has hundreds of thousands of automotive images, which they’re working to digitize and put online, with the help of Stanford University.

SCOTT GEORGE: “It allows us to share all of our photographic collections with the world at large. We’ve now digitized over 400,000 images and we have approximately another 600,000 to go.”

LM: This is a perfect display of cars that have made history…or shaped it…and the only thing you’ll be wondering when you walk out, is when you’ll be back.