Be it holidays, vacations, or just commuting, you don’t have to travel too far and wide to know there are more cars on the roads than ever! And with that comes an increased risk of road rage! Well our FYI reporter Lauren Morrison breaks down one new study that shows just how prevalent the problem is, and what you should do to avoid it.

JUREK GRABOWSKI: “We’re all humans, It’s normal to be angry, but the question is, how do you react to that anger?” 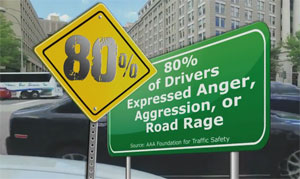 LAUREN MORRISON: Nearly 80 percent of drivers expressed anger, aggression, or road rage at least once in the last year, according to the latest study by the AAA Foundation for Traffic Safety.

LAUREN MORRISON: “Road rage and aggressive driving comes in many forms. Purposefully tailgating seems to be the most common. The study estimates that over 100 million drivers do it every year.”

The study also found that about 91 million drivers have honked their horn to show annoyance or anger.

Another 49 million have tried to block another vehicle from changing lanes.

And believe it or not, almost 6 million drivers have used their vehicle to bump or ram another on purpose!

JUREK GRABOWSKI: “Well, I think people use their cars as an extension of themselves and their day and their motions, and that can become dangerous if they’re angry and they’re confronted with other angry drivers.”

LAUREN MORRISON: “Who’s behind the wheel plays a major role in aggressive driving. The study found that young men are 3 times more likely than women to get out of their car and confront another driver.”

And it’s not just who’s behind the wheel…but where they’re driving.

JUREK GRABOWSKI: “We looked at a lot of drivers across the United States and the drivers in the Northeast reported a lot more angry actions. This could be because they’re bigger cities, they're more congested, it takes more time to get to work or where they need to go.”

LAUREN MORRISON: The study found that drivers in the northeast were 30 percent more likely to have made an angry gesture than drivers in other parts of the country.

It’s something driver’s I talked with at a rest stop in Maryland have noticed in their travels.

BECKY GOHN: It seems interesting that some states are more well represented than others in the road rage, but I won’t mention names.”

CARL BEAL: “I’m not gonna pick what side of the country I’m from, but out here on the East coast…yeah, it’s pretty bad.”

LAUREN MORRISON: No matter where you’re driving, road rage typically takes two, so your best bet is shrug it off.

JUREK GRABOWSKI: “Don’t return angry, you know, angry finger gestures, don’t yell at them, don’t use your headlights or your horns or don’t break check just to punish the other drivers. It’s not worth being in that situation where somebody jumps out of their car.  You don’t know if they have a weapon, you don’t know what they’re potentially going to do.”

LAUREN MORRISON: IN THE END, THE HONK OF A HORN, OR THE FLIP OF A FINGER, JUST ISN’T WORTH IT.