Now, as you can probably tell, many of the vehicles we drive here at MotorWeek are all about going rapidly. And that’s how we like it. But there are times when it’s less about speed, and more about history. Well, our FYI reporter Yolanda Vazquez is about to launch her latest adventure…and while she may not be setting any land speed records, she’s certainly enjoying this blast from the past.

YOLANDA VAZQUEZ: “Alright Joe, I’m ready to blast off into the rocket ship…”

PASSENGER: “It’s a lot of memory for people like me, who used to ride these cars…”

YV: it will make you feel good inside. 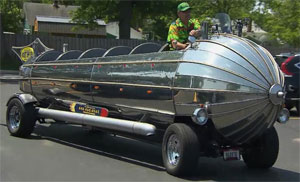 JOE TOMARO: “…and the major major rule is that we gotta have fun. Do you think you can do that? Ok!”

YV: For the past few years, Joe Tomaro and John Frato---better known as the Euclid Beach Boys—have been bringing a bit of amusement park nostalgia to the streets of Cleveland, Ohio in the form of the rocket ship and thriller car.

JT: “We call them the happiest rides on earth. And they are. They just make people smile whether riding, or seeing it.”

YV: The rocket ship car is a motorized version of the amusement park ride—seen here at Euclid Beach Park back in its heyday. Karen Lewin remembers flying around in the air - when she was a child. 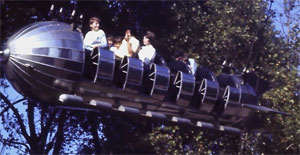 KARIN LEWIN: “…so as we rode the rocket ships, they went around and around on cables. …and it was one of my favorite rides.”

YV: When the park closed in 1969-the rides were scattered about until Joe and John discovered one of the three remaining rocket ships.

JT: “…We found it 10-11 years ago in a warehouse, out in the East side of Cleveland. And when I asked the gentleman, I said, ‘How did you get this?’, and he said, ‘it was here when we bought the warehouse.’” 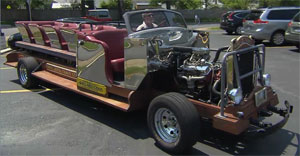 YV: They also acquired the thriller—which was a wooden rollercoaster ride. It was built in the early 1920’s…and did very well for the Humphreys—who then owned the amusement park.

YV: It took a lot of work to get these rides on the road. They had to retrofit each chassis to fit the ride car and give them both a good amount of engine power.

They also put an air ride suspension system on the car. It lowers about 6 inches—and gives the ride a super, smooth feel.

“…hey guys! The air ride system makes you feel like gliding through the air. You don’t feel a lot of the bumps or herky-jerky movement; making for a smooth ride all the way through.” 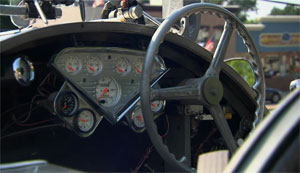 Other makeshift items include this steering wheel that was once a turret lathe and a taillight that’s mounted in an old boat part. But original parts remain—like the brackets that held the suspension cables and the front handle that locks everyone in.

As for the thriller car, the base of it is a steel frame covered with faux wood. 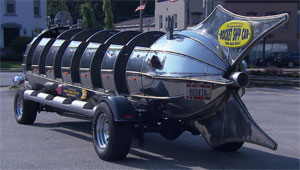 YV: The boys love driving the cars around town---but nobody gets a bigger kick out of these novelties than their riders.

YV: What did you like the most about it? 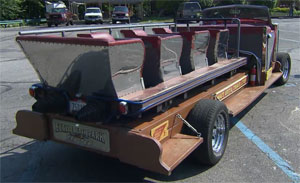 SUMMER: “…my hair was going back and forth, and like going all over the place.”

YV: These students from Grant Elementary School were treated to a ride in the cars because of their fundraising efforts

JOY: “…it’s something they can get in with their friends; they can have fun; they can raise their hands; they can feel the wind in their hair; it’s just like a fun ride.”

YV: More than 45 years after the park has closed, a small sliver of those glory days remain…thanks to the Euclid Beach Boys who are preserving a part of Cleveland’s amusement park history.