Social media’s influence on the auto industry has been enormous. Auto makers are using a wide variety of sites to influence customers. As a response, we’re purchasing cars much differently than say a decade ago... Thanks to social media’s instant connectivity. Our FYI reporter Stephanie Hart explains. 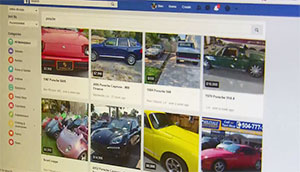 How has social media changed the new car buying process?

SCOTT TALAN: I think it depends on the age of the buyer, for instance, Instagram is the nirvana for younger people, but so far car makers haven’t cracked that. They’re mostly using Facebook, some twitter and videos obviously have appeal because the cars move and that fits the medium of a video on YouTube. So I think whether its hosted on YouTube or not the idea of videos and cars just fits together so very, very well and if a car seller is not there they’re almost being negligent and certainly missing opportunities by not using video whether it’s on YouTube or some other video sharing platform.

STEPHANIE HART: On social media image is everything. From the camera angle to the color to the location. All of the details matter.

Social media’s influence has even changed how new cars are being designed…especially the interiors. That’s evident in the gigantic, tesla-inspired infotainment screens we are seeing in more and more cars. In our fast paced world people want to be connected 24 7 while they’re on the go. 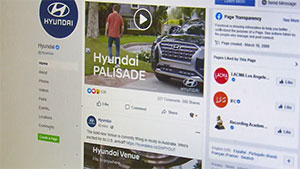 SUNNY PRASAD: The Volvo x90 showed up and you know the designs and features are so good. I love Audis and I used to have one so I get a lot of those you know and it just shows good features and it’s nice to see the designs and always tempting you know.

STEPHANIE HART: Are social media conscious people more prone to believe information on social media about cars than from other sources?

SCOTT TALAN: Yes, if they view the source on social media as being a peer or someone who is disinterested then the answer is yes. It is more believable and more trustworthy and that’s why there is such a big appeal and strength to social media because it is coming from someone else who is not making a commission or a buck off the sale.

STEPHANIE HART: And it works both ways, savvy social media folks can see right through the pretty photos and clever captions. 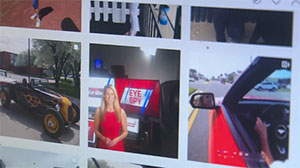 ARIELLE SMALL: I’m more aware of the ads I see online and how if they’re talking about halo top ice cream for example an ad will pop up for halo top on Facebook. It sort of affects what I buy in the sense of I usually don’t buy the things I see in the ads because I think the more ads I see for something specific the less compelled I am to buy them because of just the awareness I have.

STEPHANIE HART: Whether you love or hate social media… bottom line…  it’s a tool to research cars and see what your peers think of a car and that’s why it’s increasingly so vital in the car buying eco-system.

Here’s a real life example: Ron Philips, seen here in this photo, went to Florida and rented a convertible. He posted a photo on Facebook of himself behind the wheel. As you can see he’s smiling really big. He got so many likes on Facebook the experience stuck with him and he ended up buying a convertible. And in a perfect world that’s exactly how social media should work.