One of the great things about America is the mass numbers of car museums. While many of them are big collections open to the public, but others are smaller groupings often open by appointment only. But only one can claim to be the oldest in the land. Our Stephanie Hart traveled to central Pennsylvania for a private tour of the one-of-a kind William E. Swigart Jr. Automobile Museum.

STEPHANIE HART: The Swigart Museum is a hidden gem. In all there are 150 cars in this collection. Each car has a pretty cool story attached to it. 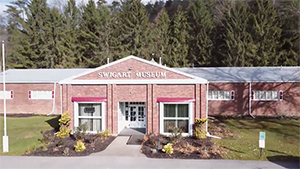 Looking around, it’s hard to believe that this incredible collection started with twelve cars one hundred years ago!

W Emmert Swigart founded the museum, followed by his son, William E. Swigart Jr.. Today a board of directors, led by his wife, Pat, continues their legacy. Which includes preserving this star of the museum.

This 1936 Duesenberg Speedster is a wow car, it’s pretty easy to see that. It’s a one of a kind car… word on the street has it that  Jay Leno wanted this car for his personal collection

PAT SWIGART: They’re a big car, they’re an elaborate car, they're very elegant, they like to go. They don’t like to be slow.

STEPHANIE HART: And it’s the only 12 cylinder ever made.

STEPHANIE HART: Which means it was in high demand back on the auction block in 1995.

PAT SWIGART: Jay supposedly said on his program one night that he almost owned the only 12 cylinder Duesenberg but he lost out to some old farmer from Pennsylvania. 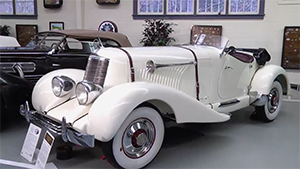 But there is so much more to be seen here. Another one of a kind is this 1920 Carroll 6.

This touring sedan was designed to look like a convertible. Shortly after production, a number of cars were destroyed in a blizzard as a result of antifreeze problems. This green example is the only survivor.

This 1908 Studebaker Electric took people from the old senate building to the capitol in Washington, DC. This seats 12 people. If one driver was used he actually had to get up and change seats to change directions.

That’s because the coach traveled through a narrow, underground tunnel and it was too big to turn around.

The vehicle was powered by twelve six volt batteries and had a range of 85 miles.

An electric car back in the day?

MARGE CUTRIGHT: Yes, everybody thinks electric cars are new, they're not.

STEPHANIE HART: Here is another car that some may say was ahead of its time, partly due to its owner, Eleonora Sears. 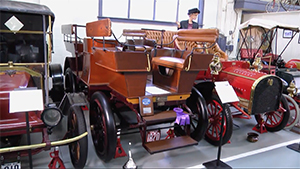 She was a wealthy socialite who excelled in sports and broke down barriers for women. She had her 1916 Scripps Booth custom made-which was taboo back then.

MARGE CUTRIGHT: It has pearl handles inside- it’s very luxurious inside. The upholstery is very padded, but she was a tennis star who wore pantaloons and pants and all kinds of things that women didn’t usually do. And she got speeding tickets.

STEPHANIE HART: Only some of the cars in the museum still run, including this amazing 1903 curved dash olds-mobile. The first car to be produced on an assembly line.

PAT SWIGART: It’s just a neat little car. It's tiller driven. He loved to come down here, take it out of the museum and go out onto the highway. Of course you’re going down the middle of the road in this one cylinder car and the trucks are flying past, but he was very happy that he could go up the Mapleton Hill which is a hill just near here in first gear.

STEPHANIE HART: The Swigart Museum also features cars from the movies. This Tucker 48, number 1013, was featured in the 1988 movie “Tucker, the Man and His Dream.

Back in the day, tuckers were dubbed the car of the future because of their innovative features; like headlights that moved with the steering wheel. Today, some tuckers sell for about 2.5 million dollars.

Herbie the love bug isn’t the most expensive car here, but everyone loves it.

STEPHANIE HART: Passion for the automobile fuels this museum, helping fulfill its mission to preserve and celebrate the American love affair with the car.