Vehicles today come with all kinds of cool technology, but let’s be real, it can be a little overwhelming. If you’re like me, you don’t know half of your vehicles capabilities, or how to work them, but that’s where these guys come in. Buttons on the dash and wheel….voice command...options for towing…and even touchscreens…trying to figure out how to operate them can leave your head spinning…even if you read the owner’s manual! 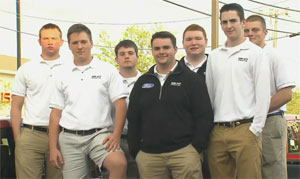 ANTOINE JAMISON: “I mean, let’s face it, technology has changed over the years a lot. We’ve went from flip phones to the iphone and there’s so many things on these cars these days people don’t understand.”

LAUREN MORRISON: But Quirk Ford’s technology team does understand…they’re all high school students, ranging from 15 to 18 years old, so this kind of technology is second nature for them.

ANTOINE JAMISON: “Well the kids I work with, those kids are amazing. These kids know more about technology than any adult would give them credit for.”

LAUREN MORRISON: After the sale is made, that’s when the tech team gets to work.

ANTOINE JAMISON: “I know myself being the age I am, I would be very intimidated when a 15-year-old young man sits with me to go over something I just purchased that I had no idea what I bought and he knows everything on that vehicle from top to bottom.”

LAUREN MORRISON: So I decided to give the team a test, and find out how much they really know…spoiler alert…they know a lot! 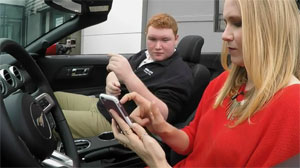 LAUREN MORRISON: “Alright Danny, so I just bought this Mustang, walk us through what a typical day looks like for you.

DANNY MCDECITT: “OK, Well first, do you want to add your phone?”

LAUREN MORRISON: After synching my phone…

LAUREN MORRISON: It was on to the steering wheel. 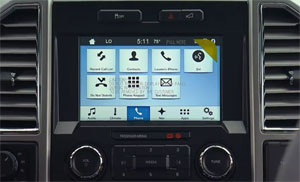 DANNY MCDECITT: “The voice command plays a huge role in a lot of this technology. You can make phone calls, you can change the radio station.

LAUREN MORRISON: Moving from the Mustang…it was time to really test these teens…with a touchscreen…

SEAMUS MCBRIDE: “So this here is our new Sync 3 touchscreen, which replaces the old MyFord touch.”

LAUREN MORRISON: A rundown of the navigation system…

SEAMUS MCBRIDE: “So, NAV gives you a map of where you are and the red arrow controls where you are. You can zoom in and out of the map with the plus or minus right here.”

LAUREN MORRISON: And a talk about towing… 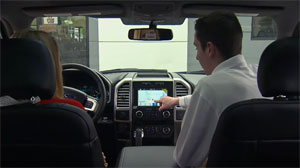 SEAMUS MCBRIDE: “So up here on the main screens, you can scroll through here and find certain towing information.”

LAUREN MORRISON:  It’s clear, these teens know their tech talk. Whether it’s a basic package, like the one in this 2016 Ford Mustang… to this decked out Explorer, which has every piece of technology you could ever want or need. The teens really have an understanding of all the technology in every one of these vehicles on the lot.

THOMAS PUGSLEY: “Some of the training that we do is we take online tests and basically just learning the vehicles ourselves. So going in, sitting there alone, going through if there’s a new feature added, just learning those and taking our own time to get used to them.”

LAUREN MORRISON: And let’s face it…making 10 dollars an hour, sitting in the latest models, with the newest technology…beats flipping burgers for your first job.

THOMAS PUGSLEY: “So we get to sit in these awesome, brand new cars, it’s kind of a luxury.”

LAUREN MORRISON: And eager applicants seem to know just what a luxury that is. 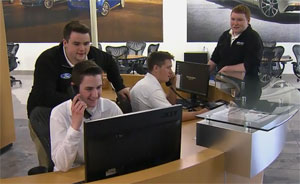 ANTOINE JAMISON: “Yes, I have well over a hundred applications, waiting gentlemen that want to work.”

LAUREN MORRISON: Other dealerships from around the country want in on the tech team too!

ANTOINE JAMISON: “I’ve had at least 12 different dealerships from different states contact me in reference to how to start the program, what I did to start it, hiring process, age requirements, and what we actually pay the kids.”

LAUREN MORRISON: For Quirk Ford though, the teens just add another layer of customer service.

LAUREN MORRISON: A rundown of all the tech-specs in a vehicle takes a little less than an hour…and while not every new owner opts to talk to a teen before leaving the lot, most find their way back if they don’t.

THOMAS PUGSLEY: “Yeah, I’ve seen people come back and say no big deal, I can handle this myself, and then they’re right back here.”