A 5-time Championship winning Pro Racer and Corvette Hall of Famer is behind a give back program designed to put the brakes on dangerous driving habits, and he certainty has his work cut out for him. According to the NHTSA, distracted driving alone claimed more than 3100 lives in 2019. As Stephanie Hart shows us, learning how to be a safe driver starts early and it’s a family affair. 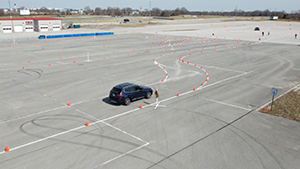 STEPHANIE HART: I’m here at the NCM Motorsports Park in Bowling Green, Kentucky, where race car driver Andy Pilgrim is teaching teens and their parents the mental and decision-based side of driving, pulling from his 30 years of experience racing cars on the track.

ANDY PILGRIM: The basic stuff just to get them comfortable and the parent comfortable. Parents are more nervous than the kids.

ANDY Pilgrim and racetrack workers use radios to give teens like Francee real time feedback while navigating this course.

ANDY PILGRIM: And if they don’t see turn signals being used, if they see they’re not stopping at the stop sign, if they need help to stay in their lane, if they’re not getting on the brake pedal quickly enough when they get into the emergency braking area-- these things we can help them with.

We want them to feel ABS before they leave here and that’s very important once they feel that pulsing under them they sometimes let off the brake pedal pressure. 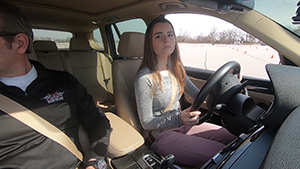 STEPHANIE HART: Instruction like this, is more important than ever before. Today, driving collisions and crashes are the number one killer of teenagers in the United States.

FRANCEE TABOR: Andy’s program helped me in ways Drivers Ed could not and I would say the biggest points that he made that helped me is keeping your eyes up all the time and looking out for hazards that could be on the road.

STEPHANIE HART: Important lessons for all teen drivers and great reminders for seasoned drivers too.

GRADY TABOR: Some of the programs Andy has that I have gone through as a parent trying to teach her how to drive has actually made me a better driver, so it’s been a really good experience.

ANDY PILGRIM: That’s about 1.7 million students a year-- no structured driver ed- who are they gonna drive like? Their parents. One of the funniest things that I hear from driver ed teachers is give me 5 minutes with the kid and I’ll tell you exactly how the parents drove. 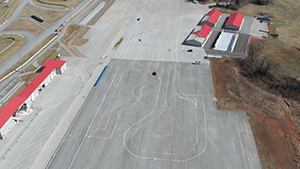 STEPHANIE HART: Pilgrim strongly believes that all teen drivers start to learn how to drive from their parents when they’re just a toddler riding in a car seat.

When the kids are in the car please don’t do it.

STEPHANIE HART: In reality, any non-driving activity you do is a potential distraction and increases your risk of crashing. Texting while driving is the most alarming distraction. Sending or reading a text takes your eyes off the road for 5 seconds.

At 55 miles per hour that’s like driving the entire length of a football field with your eyes closed. 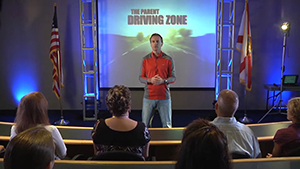 FRANCEE TABOR: I think something that’s really important is putting your phone on ‘do not disturb’ when you’re driving so that even if you get a notification that you don’t feel obligated to check it ‘cause you won’t see it.

ANDY PILGRIM: I live a conflicted life, what can I tell ya? My mother always said never be so busy that you can’t lend an ear or a hand to somebody who might need it and I guess that stuck.

STEPHANIE HART: Today, Pilgrim is fulfilling his safer driver passion through his Traffic Safety Education Foundation-when he’s not winning races. He has produced hours of free driver education videos that are available for viewing on the TSEF website.

It’s a terrific resource for anyone, of any age, who wants to improve their driving skills.