The number of fatalities on American roads is on the rise again, and a growing percentage of those deaths are being blamed on distracted driving, with cell-phone texting a major culprit. But could a simple device be the “texting driving” deterrent that’s so urgently needed? Our FYI reporter Lauren Morrison looks into the “Textalyzer.”

LAUREN MORRISION: 97 percent of people say it’s a problem…Yet 7 in 10 drivers admit to doing it….

And the CDC estimates that each day, around 9 people are killed….and a thousand injured in crashes that involve distracted driving. Numbers like that don’t phase you? Maybe Ben Lieberman’s story will. 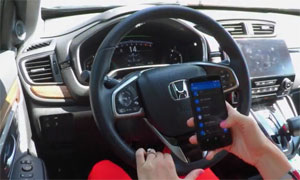 LAUREN MORRISION: In 2011, Ben’s 19 year old son, Evan, was in the back seat of a car when it was hit head on. Evan ultimately died from his injuries.

“The first night, the doctor said he had a 10 percent chance to make it through the night. So he made it through that night and 30 others and it was a really up and down battle but eventually, we lost him right in front of our eyes.”

LAUREN MORRISION: While the driver of the vehicle Evan was in said he fell asleep, Ben began to question that.

BEN LIEBERMAN: “We started asking questions about what was going on and what they did at the investigation and we realized there’s just no protocol in place.”

LAUREN MORRISION: Through a civil lawsuit, Ben was able to get a hold of the driver’s cell phone records, which revealed the driver was texting around the time of the accident. 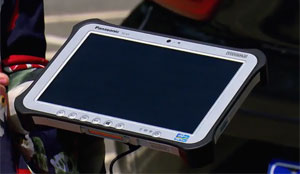 BEN LIEBERMAN:  “The crash happened in June. I think I got them in February. It was 6 agonizing months for me to get those phone records.”

LAUREN MORRISION: 47 states have banned texting and driving, but without a confession or eyewitness, it’s a crime that’s hard to prove.

BEN LIEBERMAN: “There was no deterrents in place for this to happen to my other children, to my friend’s children. Knowing that, there was a degree of frustration.”

LAUREN MORRISION: Driven by his grief and frustration, Ben approached Jim Grady, the CEO of the digital intelligence company, Cellebrite.

JIM GRADY: “And he told us about the challenges of getting the data after an accident from a phone and whether the other person was texting and we thought we can do something with that, we can probably help.” 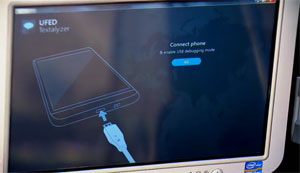 LAUREN MORRISION: The device they came up with is called a “textalyzer.” When connected to a phone, it can pick up whether there have been any taps or swipes. Opponents of the device have already cited privacy concerns, but Cellebrite says no personal information, like who you texted, or what you said, would be obtained.

LAUREN MORRISION: In order to properly test out the textalyzer, I am going to be texting and driving, but we’ve blocked off this parking lot so we can do it safely.”

LAUREN MORRISION: “I’m going to open up some stuff like What’s App, also check a message on Facebook Messenger, getting a text message over here. There’s a lot going on and I can barely concentrate on driving.”

LAUREN MORRISION: “Ok, so I’ve been in an accident. Officers arrive on the scene. What happens next?

JIM GRADY:  “The officer would ask you to unlock your phone. And hand you this cable. you connect the cable to your phone.”

LAUREN MORRISION: “So you never even have to hand your phone over to the officer?”

JIM GRADY: “No, it takes about 30 seconds and you can see the results. I see here you opened Whats App, you did a Facebook Messenger, and a regular text message.”

LAUREN MORRISION: “And so you can see all that, but it doesn’t say what I said in Facebook Messenger, nothing like that?”

JIM GRADY: “Nothing like that ever comes into this device.”

LAUREN MORRISION: The Textalyzer is still just a prototype and some time away from actually being in a police cruiser…but the device is gaining traction.

Legislation was introduced in New York…and the governor there has ordered a study into the technology. Other states like Tennessee, New Jersey, and California have all expressed interest as well.

For Ben Lieberman, these are all signs of progress, and hopefully, a change in thought on the dangers of distracted driving. He says he never set out to be an advocate, but for his son Evan, it’s a role he now has to play.

BEN LIEBERMAN: “I think he’d be happy to see something good come out of it. He’d probably be a little embarrassed about the attention. But, if you would have said to me about being an advocate I would have said I’m not the guy, but you know you see some things that are so wrong it’s hard to turn your back on it.”