Whether it’s Speed Racers Mach 5, or 007’s famous Aston Martin, superheroes always seem to have the coolest rides around. One more obviously on the list, the batmobile. Well our FYI reporter Yolanda Vazquez caught up with a real life caped crusader who built his own, to bring good to Gotham City and beyond. 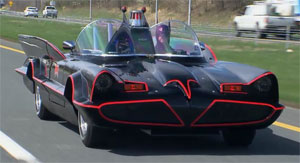 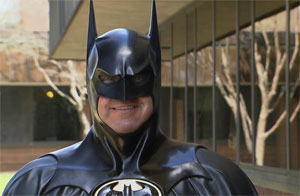 It’s hard to get Lenny Robinson to break character-especially when he’s in his “superhero” glory-driving down the road- -posing for pictures and chatting with law enforcement’s finest- but the real reason why this Maryland native dons a 35-lb custom-made costume is to brighten people’s day.

Robinson has been taking his show on the road-and across the country--for more than a decade visiting children in hospitals and at charity events. 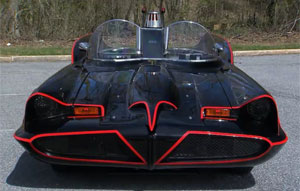 ATTENDEE: Love Batman, love his car…I’d like for him to take me for a ride in it, but he hasn’t done that yet.

ATTENDEE: It just takes you back to that time when you were a kid, and I’m an avid comic book collector, so it’s just even better for me to see this.

LENNY ROBINSON: It’s the most rewarding this ever. Visiting the kids and making a difference in their lives, it’s the best most fulfilling thing anyone can ever do.

YOLANDA VAZQUEZ: To make his Batman persona complete-Robinson knew he needed an authentic ride. He says it took three years to build his blinged-out batmobile. 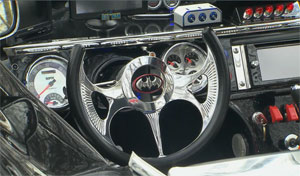 LENNY ROBINSON: Little touches here and there not too much.

YOLANDA VAZQUEZ: The Batman logo is everywhere- stitched into the seats--embedded in the steering wheel—and yikes!--is that a batman brake pedal?

LENNY ROBINSON: I’ve kinda done the car itself my own way…I’ve detailed it the way I like to detail it, just to add my personal touches to it, there is no other car out there like this.

YOLANDA VAZQUEZ: Measuring nearly 20 feet in length with distinctive wing-shaped tailfins, the car is built a bit differently from the one featured in the TV series.

LENNY ROBINSON: “Instead of putting it on an old lincoln or cadillac we had a custom frame done.

YOLANDA VAZQUEZ: A quick look under the hood reveals more fancy features—the engine is a 5.0 liter Mustang Cobra with a 4 barrel edelbrock carburetor. 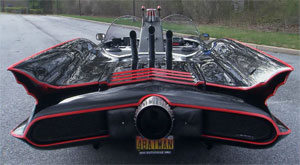 YOLANDA VAZQUEZ: Other distinct details include wilwood brakes and a 9-inch currie rear end and positraction. Of course no batmobile would be complete without a flashing siren, batray projector, bat beam and batray headlights-remember those from the TV show? 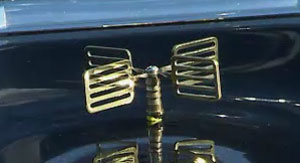 And what about the fiery afterburner? it’s in the back of his car as well.

LENNY ROBINSON: Coolest thing turn on the engine, fire came out the back… that’s one thing I had to have.

YOLANDA VAZQUEZ: And there’s also a nav system to get around town. A modern-day, must-have for a 21st century batmobile.

Who needs Robin when you’ve got all this? That’s ride, I decided to get in on some of the fun. After all, it takes a special outfit to ride in the batmobile. 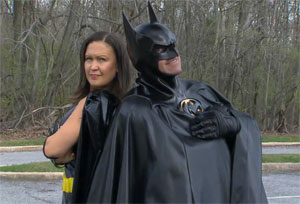 This daring duo is ready to fight crime and so off we went to save the world.

Riding shotgun in this tricked-out car was a bat girl’s dream. It handled the roads well and had plenty of power…

But the real fun is watching robinson take on the role of “superhero”-stirring up excitement where ever he goes- and as he cruises along in one of the most iconic cars in television history.