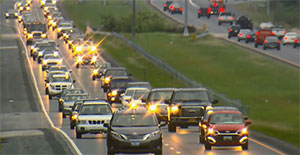 It’s no secret, we are driving more than they ever. According to triple a, Americans spend an astonishing 70-billion hours behind the wheel each year. But, much of that time is wasted stuck in traffic. Our Stephanie hart explores the human factors behind our slowing daily commute.

Keantay Fenwick: I like getting where I gotta get and not wait too long.  I’m sure everyone else feels the same way.

Marvin Jones: I think of the time we are wasting when we could be sitting at home.

Autumn Pelham: The traffic is two lanes not moving anywhere but what I do to relax is jam out to my favorite song.

Stephanie Hart: These days we are driving so many miles per year that it equates to driving from Washington, D.C. to San Francisco roundtrip twice. Tons of driving plus traffic equals money… just ask AAA’s John Townsend.

John Townsend: It’s costing us individually thousands of dollars per year not only in terms of lost productivity but in the time that we could spend with our families and friends and in leisure pursuits. 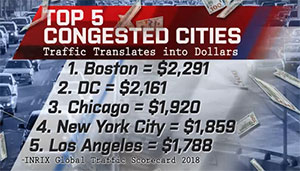 Stephanie Hart: Washington, D.C. has some of the worst congestion in the nation with people spending more than 88 hours being stuck in traffic. Other cities also have similar gridlock problems.

John Townsend: Well one thing that hasn’t changed in the last 50 years is the fact that we have not added any additional road capacity or infrastructure. We’ve made a great investment in mass transit as we should have and should do and we’re making an even greater investment in transit options, but the fact of the matter is most people loathe to leave the car behind.

Stephanie Hart: AAA reports 8 out of 10 people still drive to work alone. Why? Because it’s all about personal freedom and setting your own schedule. 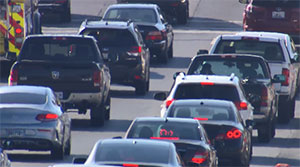 John Townsend: And unless we do something about our infrastructure… unless we invest trillions of dollars… we will be stuck behind the 8 ball and things will not improve. Our infrastructure is aging, it’s crumbling, and we’re still stuck in the 1950’s and 1960’s in terms of major investments.

Stephanie Hart: But while everyone looks to Washington, D.C. to fund more roads, the solution actually lies closer to home.

John Townsend: We have to have the political will and political will power and so far D.C., the national government, has not shown it. But what we are seeing across the country more and more states are raising the gas tax at the state level to invest those funds into infrastructure.

Stephanie Hart: Ok, so most of us don’t want to give up our cars, and there’s no speedy way to build adequate roads, so what can we do to help ourselves out of this traffic mess? Right now, carpooling, telecommuting, and varying our work hours seem to be the best bet. But in the future, there’s hope self-driving cars might help. Till then, we’ll have to make the best of going slow.