Car companies are spending an ever increasing amount of money in boosting fuel economy.  Sure, powertrain development is part of that, but there’s still an incredible amount of work to be done with aerodynamics. And while you can do all the computer simulations you want, as our Yolanda Vasquez explains, there’s only one place to find out if all of those efforts really work.

YOLANDA VASQUEZ: A prop inspection and final once over sets the stage for a day of testing at the Glenn L. Martin wind tunnel-located at the University of Maryland. This 3/8 scale model car-which is securely bolted down—will soon be put through the wringer!

As the staff turns on the fan controls and begins to collect data, this diminutive car endures wind speeds of over 100 miles per hour. And while you can’t see the wind —you sure can hear it. At the other end of this hollow tube, is a powerful fan that creates the flow of air inside the tunnel. 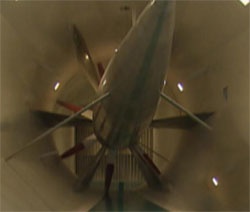 Just standing here gives you an idea of how large this fan is. 19 feet in diameter and when the wind tunnel is operational…it performs like an airplane propeller pushing the air through. As the fan slowly picks up speed these turning vanes guide that air into a settling chamber that’s just upstream of the test area.

Every wind tunnel that’s designed for vehicle testing that’s worth its salt will have that characteristic. Most of the major automakers have their own state-of-the-art wind tunnels that can test full size vehicles. Their research includes ways to reduce drag, improve fuel efficiency, and minimize wind noise. Noise we hear when you’re riding in a the car is a much more complex total problem.

Dr. Jewel Barlow says for the past few decades, this low-speed wind tunnel has been used to test automobile aerodynamics on a number of concept and production cars. But their lobby tells an even bigger story with scale models of seaplanes dating back to the 1950’s and yacht keels from the America’s cup yachts.

We say almost anything that moves in air or water we’ve probably done some work on it. And most of that work, says Barlow, involves helping companies improve product design and validate mathematical modeling.

Given specific objective of company for that car- how do you fine tune the final shape details to make it match the market segment they want to address? For example, the scale model being tested today is the G2 from Genovation cars.

So, we designed G2, the Genovation G2 to be green in content as well as very, very efficient. Genovation has been using the wind tunnel to test the aerodynamic characteristics of their car. 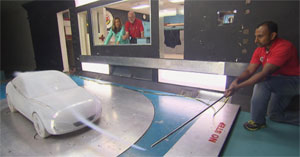 And so we knew the car was very efficient, very low CD, of a, it was point two and decent downforce but you really need to have a model in wind tunnel to validate your computer model and make sure you got it right. A better visual of the air flow around a car is the smoke demo. One of the things looking for is where stagnation point is.

As you can see, the smoke flows pretty evenly over the top of the car …but watch how it separates and becomes turbulent towards the back.

Barlow says to minimize drag, you want to have the separated flow at the back of the car as small as you can get it.

So that’s the whole goal? That represents the big goal as far as drag is concerned. Genovation CEO Andrew Saul tells me they increased the angle of their bumper cover underneath the car and added a chrome lip to the back to help reduce drag.

It’s these kinds of subtle design changes that make wind tunnel testing a crucial part of vehicle design and development for car companies both big and small.